Home / Adventures / How I Spent My Summer Vacation 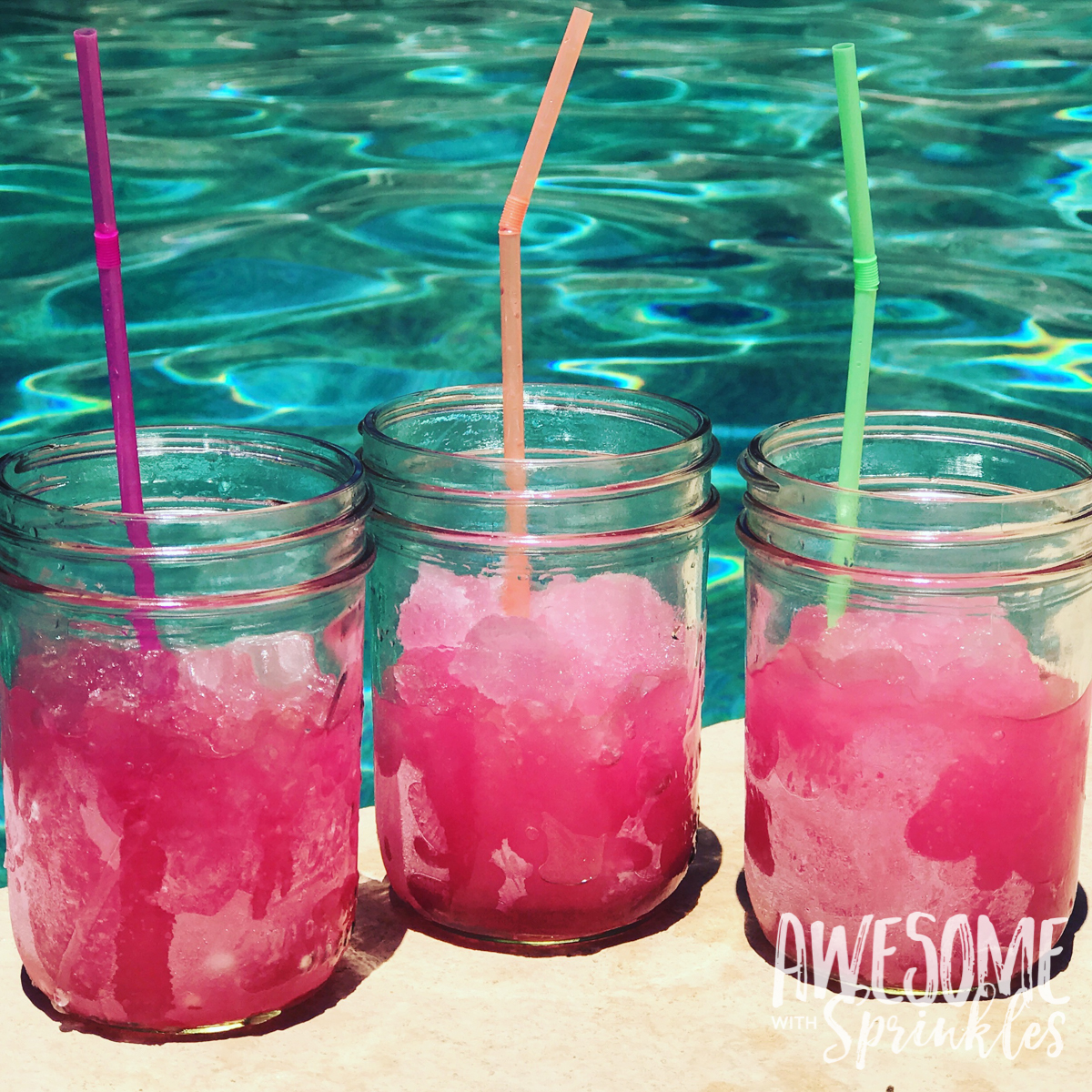 Aaaaand I’m back! Did you miss me?

I wish I could say this summer’s hiatus was due to lots of vacationing, pool time and lazy afternoons soaking up the sun and cooling off with a few cocktails but alas, it was quite the opposite. Labor Day? Try labor SEASON! Ugh!

Grab your pillow and your snack. It’s story time, kiddies.

One lovely sunday afternoon back at the end of May we were enjoying a cute little tea party ladies brunch, when one of the ladies noticed something quite strange on our kitchen ceiling. 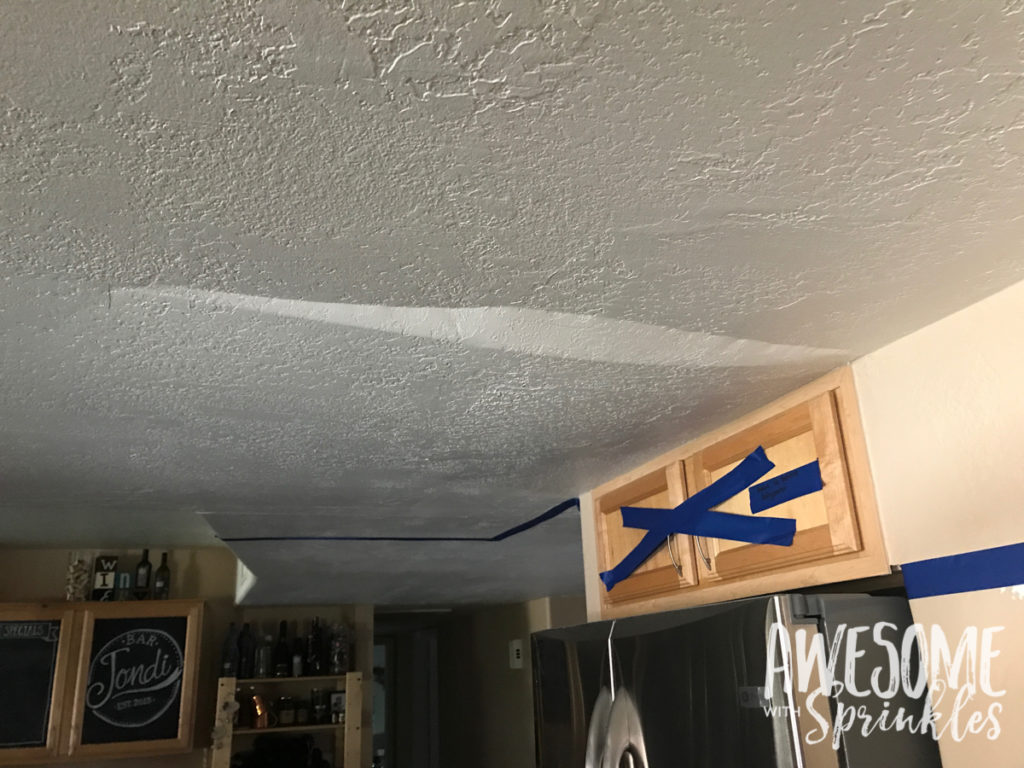 A small bowing of the ceiling soon became a sagging tear in the drywall. Lo! We have a leak!

That paint was a super hero though. I can’t imagine the mess if that had broken through. Yuck!

It was quite obvious that we had a leak. But what we didn’t know is that things were much worse that we expected.

An emergency plumber and restoration crew was out within a few hours to investigate the issue. Turns out that there was a pin-hole leak in the water line to the refrigerator. The leak had been slowing saturating all of the insulation and drywall in our kitchen ceiling for who knows how long until it finally broke through someplace we could see. What started out as fixing a leak, quickly turned into a mini kitchen renovation. 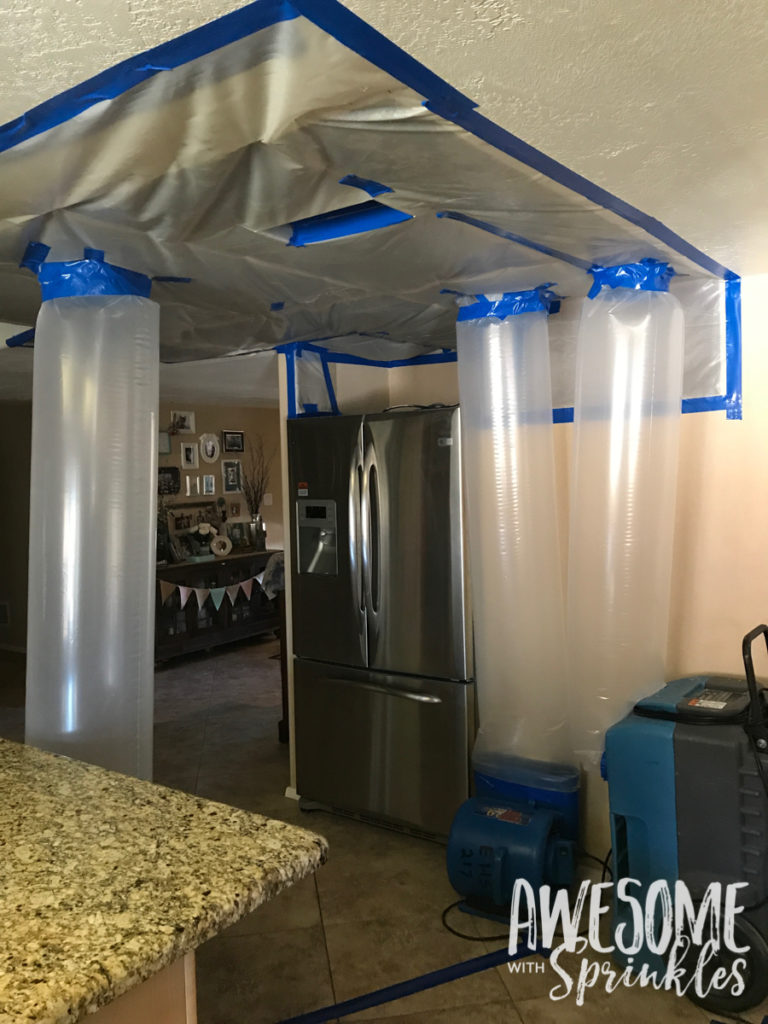 First they patched the leak and tore out all of the wet drywall and insulation from the ceiling and walls. Then they had to isolate the area and dry everything out (which fortunately in Arizona doesn’t take too long) so our kitchen looked like a scene from Breaking Bad for only a few days. 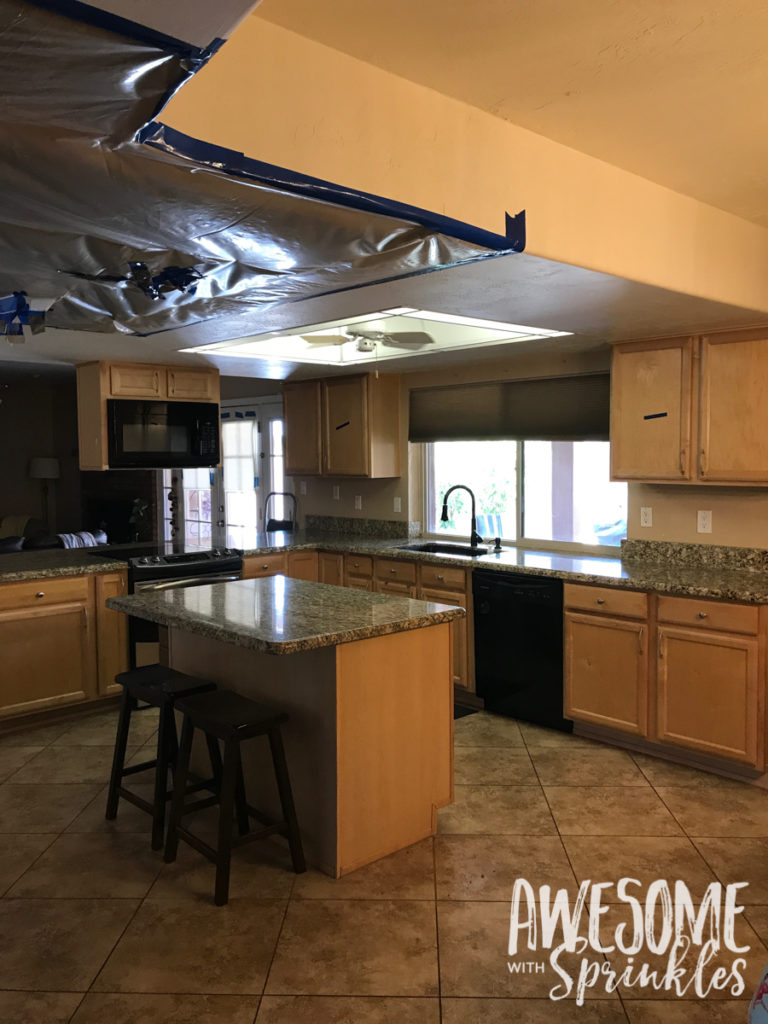 Since we now had a 10 ft hole in our ceiling, we figured this might be a good opportunity to do some of the kitchen remodeling that had been on our to-do list. Why bother to repair it if we were just planning on tearing it out again, right? So we got some estimates, started shopping for supplies, and traded our summer beach vacay for kitchen repairs. Womp womp.

Though we were bummed about the timing, we were more than excited to tackle a few things that had been bugging us since we moved into the house 6 years ago. 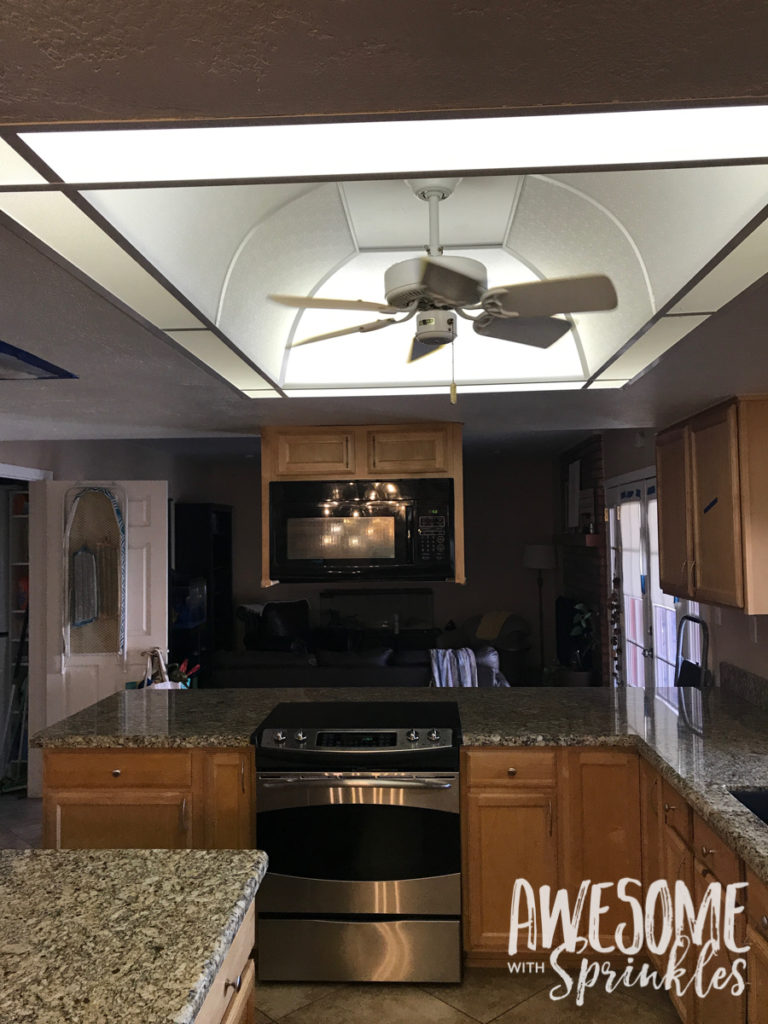 The first to go would be the soffit over the kitchen and this weird dome light structure that I am sure was a super cool faux skylight…in the 80’s.

Also I hated that microwave hanging in space over the stove. It wasn’t there in the original kitchen when I looked up former listing photos, so I have no idea why the people who most recently renovated the house thought that this was a good idea.

Plus it tripped a breaker anytime we ran it during the holidays if the outside decorations were on. Apparently it was NOT on a dedicated circuit like it’s supposed to be. In any case… buh-bye. 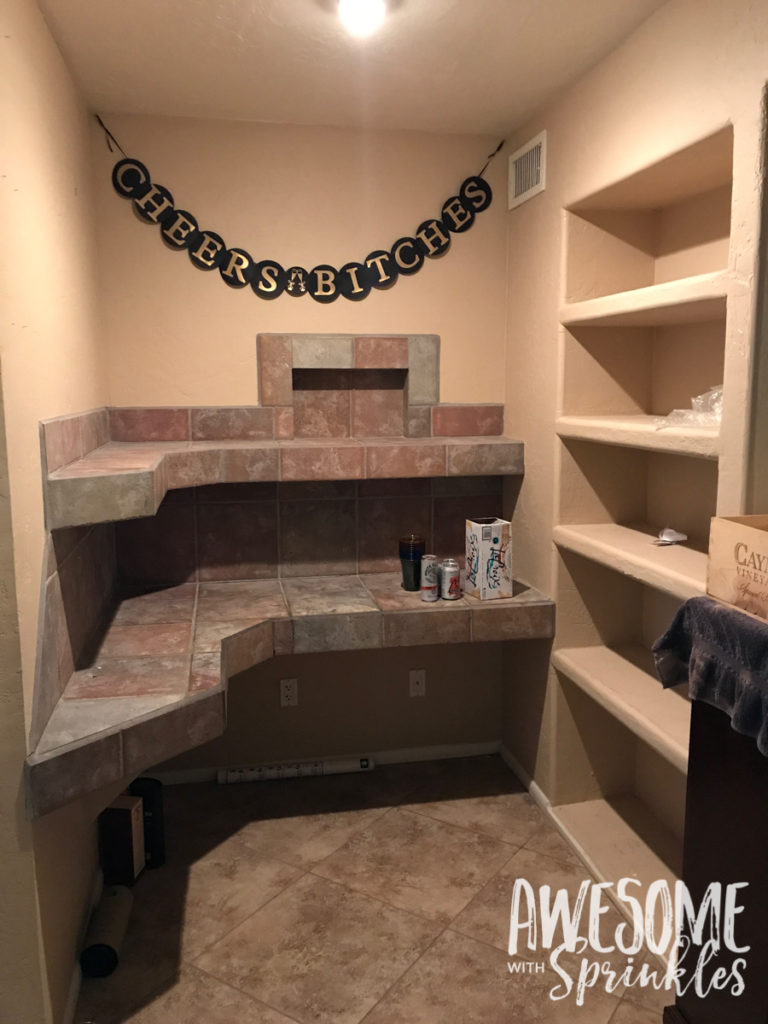 And since we were going to be making a big mess, we might as well — here is where it starts… this project had a bad case of the “might as wells” — we might as well demo the built in computer desk area that was serving as our makeshift bar and booze holder. Here it is all cleaned out, but let me tell you… that booze filled half a guest room. I don’t have a problem, YOU have a problem!

This was our plan:

We had a plan. We had a budget and were just about to get started when…cue the freak summer heat wave. With temperatures of 120º or more for nearly 2 weeks straight, summer got kicked into high gear real quick! So much of the work that needed to be done was via the attic and it wasn’t safe for workers to be up in there, so we had to cancel until the heat abated.

Without anything protecting us from the sweltering heat of the attic but a piece of plastic, things started to heat up inside too. There was a good 20 degree temperature difference from our kitchen and main living area and the rest of the house. Our AC unit was a trooper running nearly non-stop the whole time. I don’t even want to talk about the power bill for the two months that this was happening. Lots of tears.

It was a hot mess. Literally.

As if our kitchen wasn’t unusable enough during this time, did I mention that we had basically moved out? I had emptied all the cabinets, packed up all the cooking gadgets and removed all of the decor from the walls in preparation for painting and demo. So guess where all the kitchen stuff got stored for those months…that’s right. In the craft room. I even had boxes and furniture stored in our guest room and my office.

No kitchen. No craft room. Even all the wine was boxed up! People, I can’t even tell you how I didn’t lose my freaking mind.

When it finally “cooled” down (and I use that term loosely since it was still over 100º most days) we were finally scheduled for demo. We cleared out the remainder of our kitchen stuff and prepared for a week or so of a completely kitchen-less existence.

Or it was supposed too. But we hit another bump in the road when there was a mix up and no one showed up for demo on the scheduled morning. I was told there was a scheduling conflict when the contractor managing my account left the company. So demo was pushed out for another week.

With this news I figured I had better go to the grocery store to stock up for the week as we had cleared our our fridge since we weren’t planning on being able to eat at home. No sooner had I unpacked the avocados than I get a call telling me they are pushing the demo up and coming in two days. Let me tell you, if I had a table left in my kitchen I would have flipped it.

So we FINALLY get to construction and the hot mess gets hotter and messier! 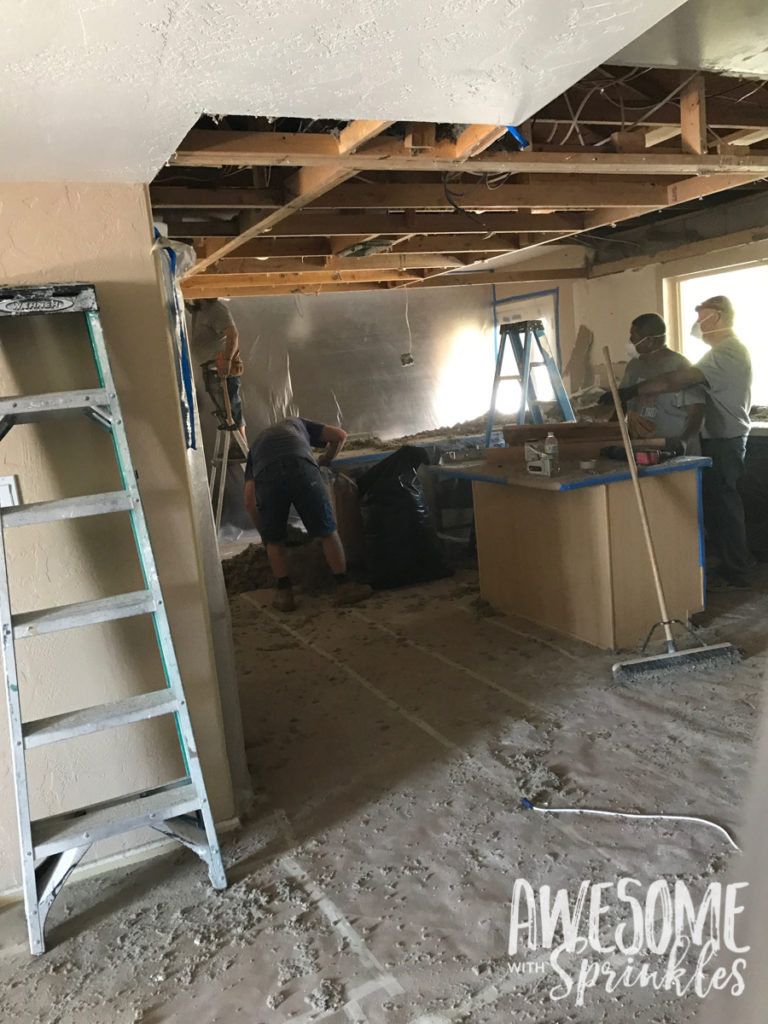 Ugh… so much insulation dust! But the demo team did an amazing job of keeping things contained. 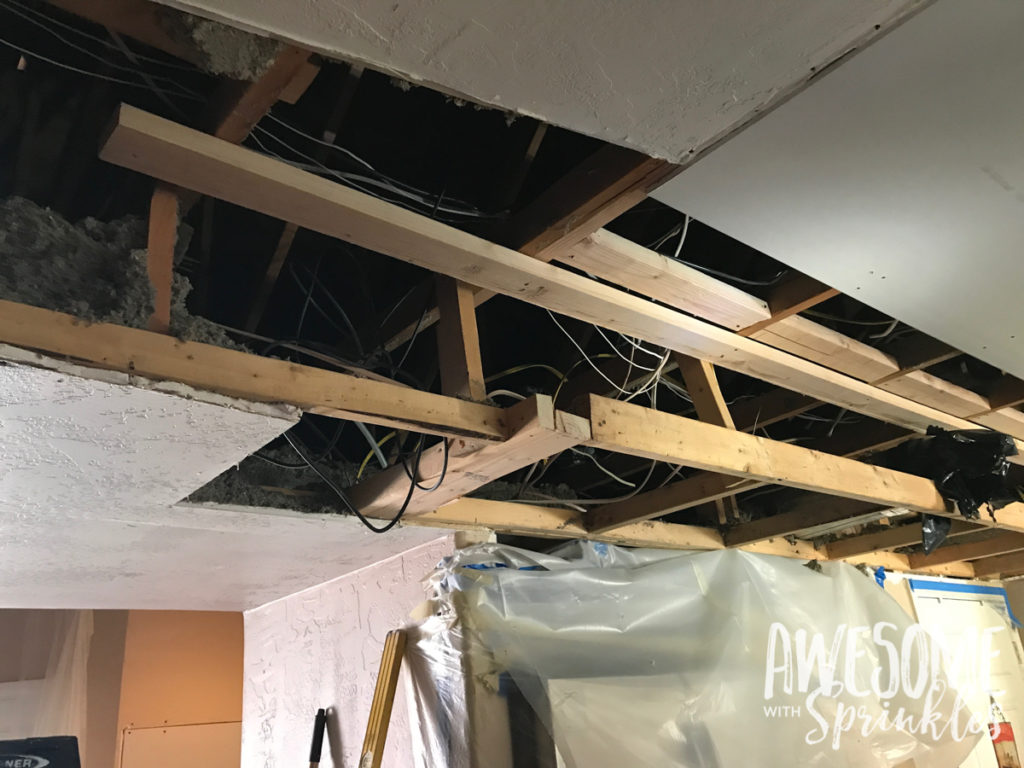 Can you believe that this is all a roof is made of?! It amazed me as they started tearing into stuff how fragile house building materials are. It’s a wonder they don’t just topple over in the first monsoon! 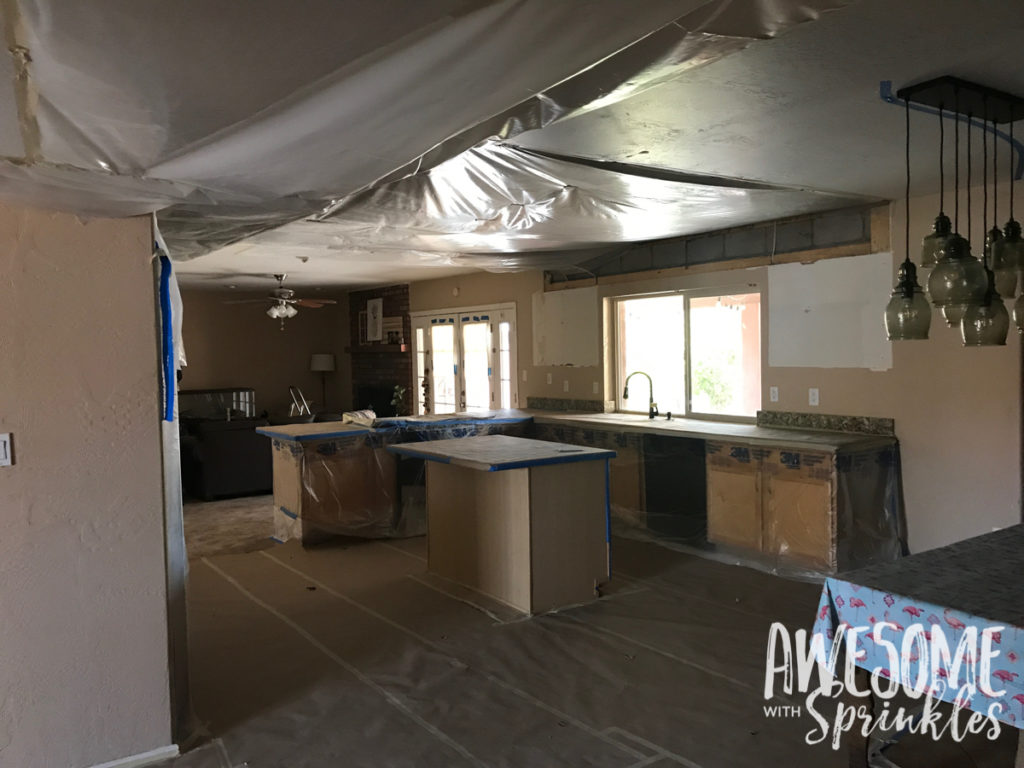 These boys know how to wield a sheet of plastic in ways that would make Dexter proud. 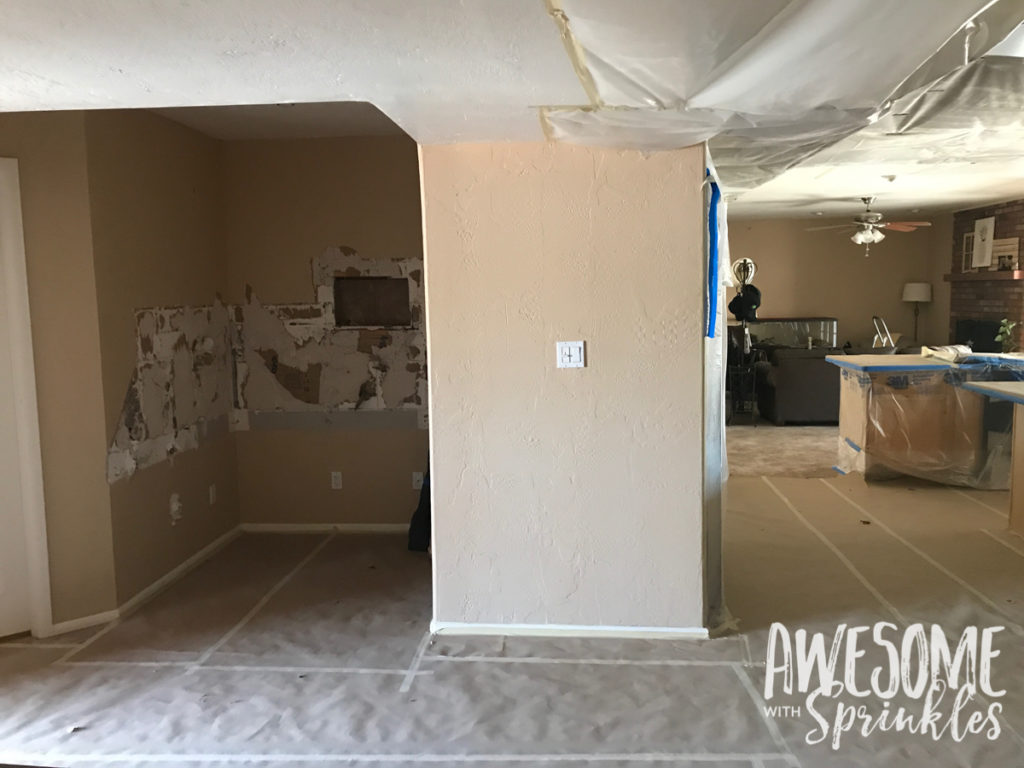 Here’s a shot of the built-in desk area after being removed. 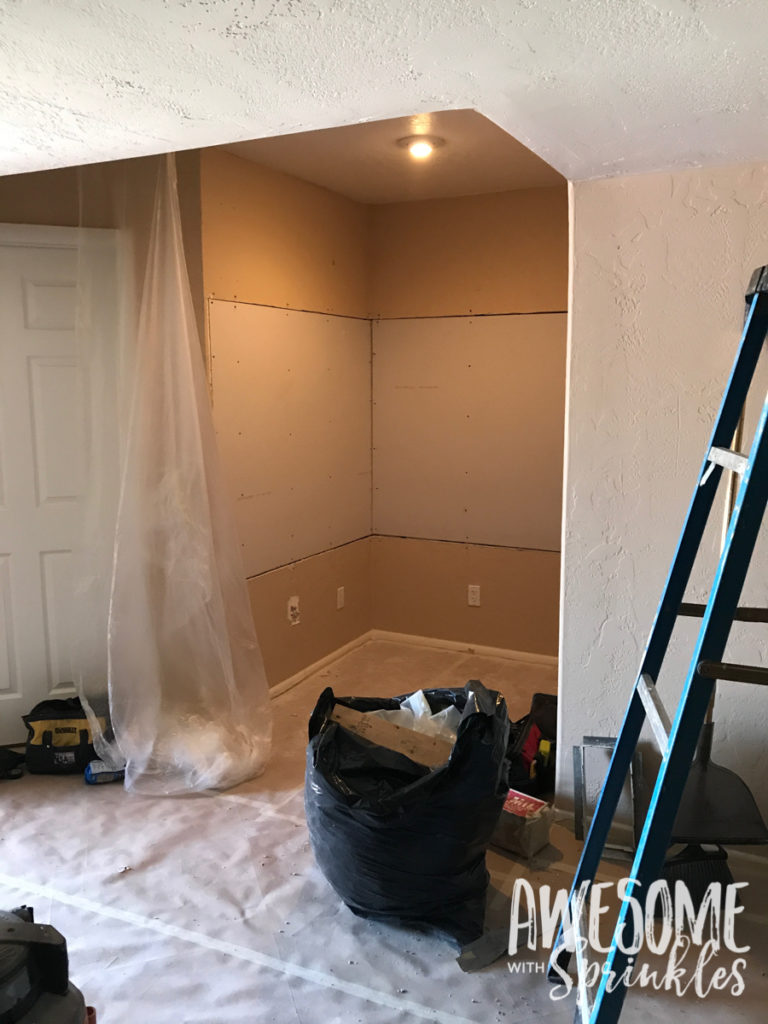 Drywall starts to go in. 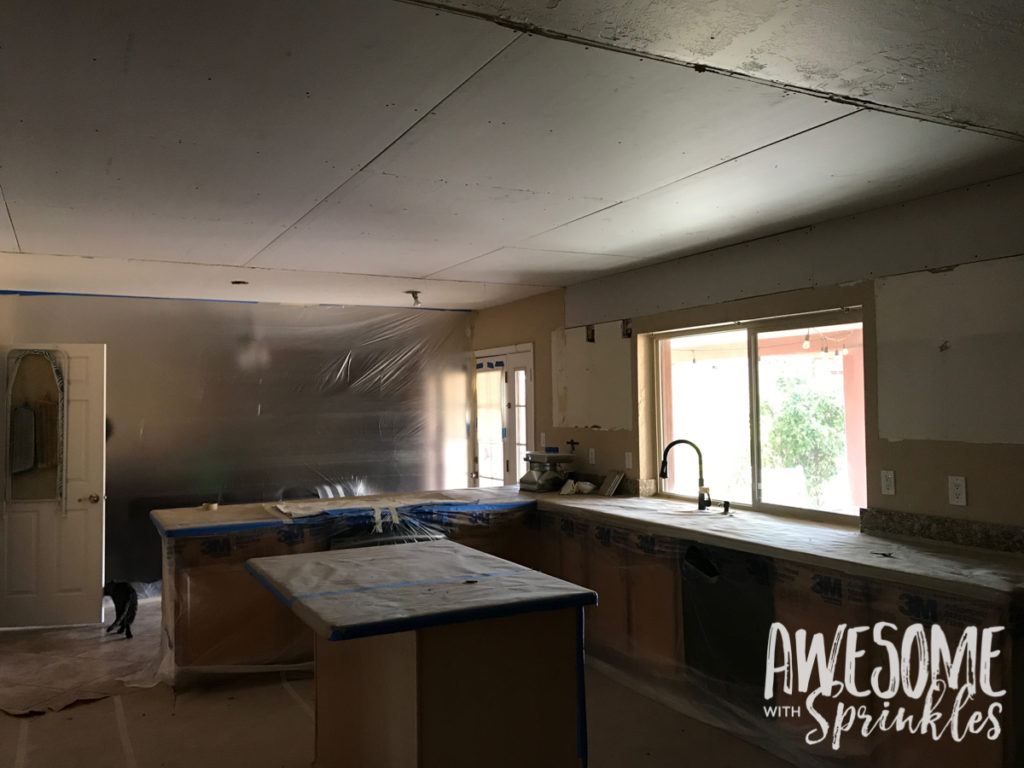 Soffits are gone! Yay! Gotta love that plastic wall in the background and Hemi photobombing as he checks it out. 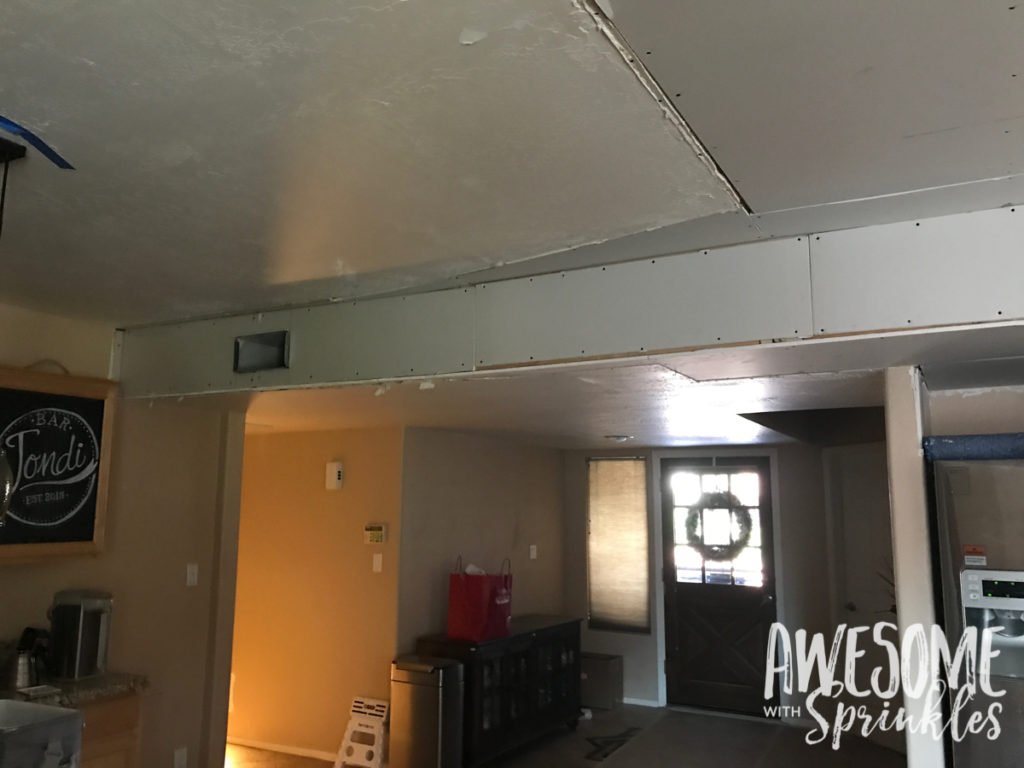 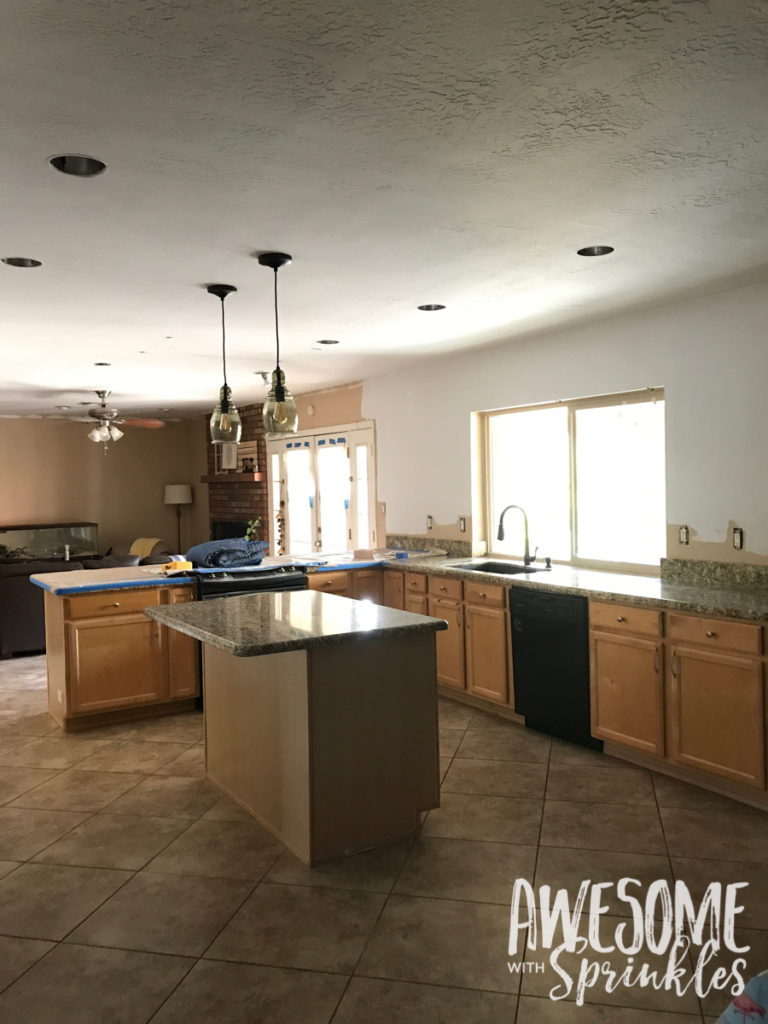 Everything has been textured and patched, the new pendant lights are in, the new cans spots are in the ceiling and we are ready for some paint!! 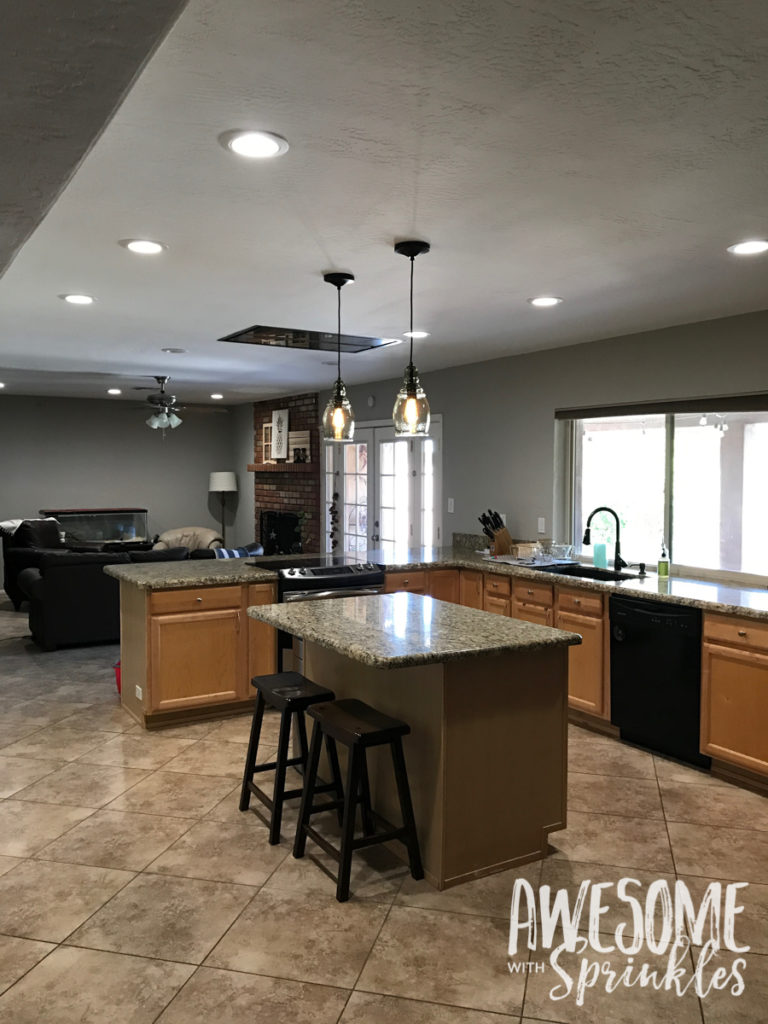 And look at that. Wow. Isn’t it amazing what a new shade of paint will do!? I have been dying to repaint since we moved in. Everywhere was tan/beige and there was little contrast. Everything looked yellowed. I felt like I was living in a sand dune. Blech!

I had tackled some of the spaces (bathrooms, laundry room, master bedroom, my office) but the main space of the house was just so big and ran together room to room that there was not a clear break point in which to cut in with a new paint color. I guess there was a silver lining to this leaky situation. 🙂 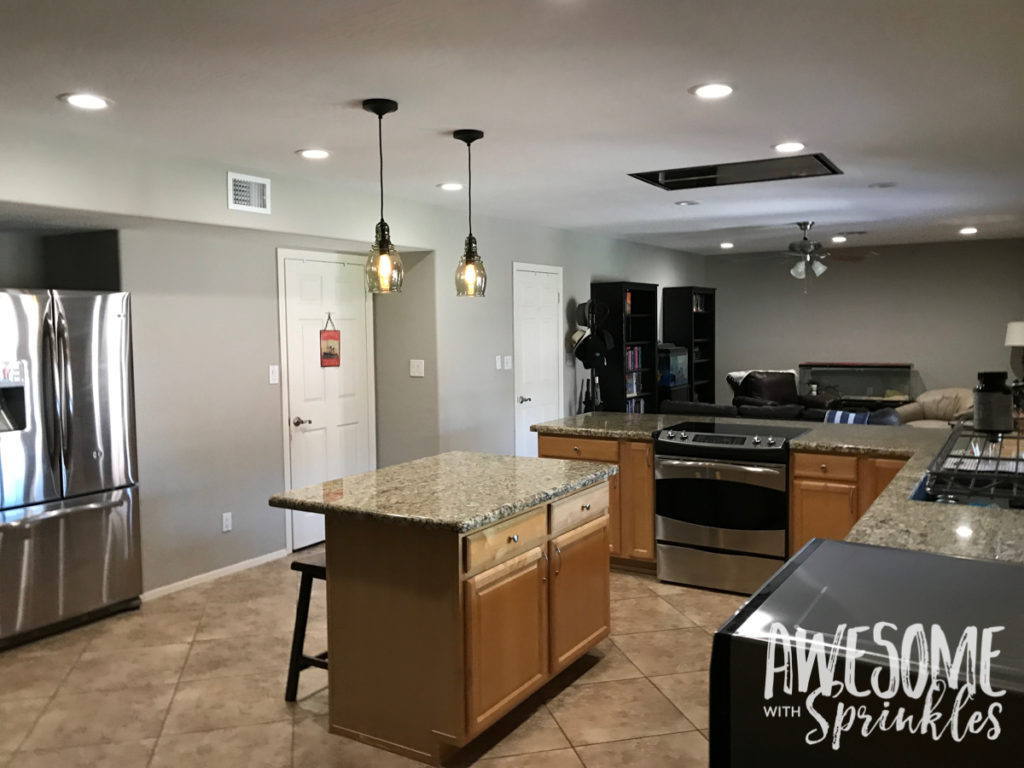 What a HUGE difference not having that 13″ of soffit did for that room. The kitchen feels twice as big and everything feels open and connected. I love it so much! 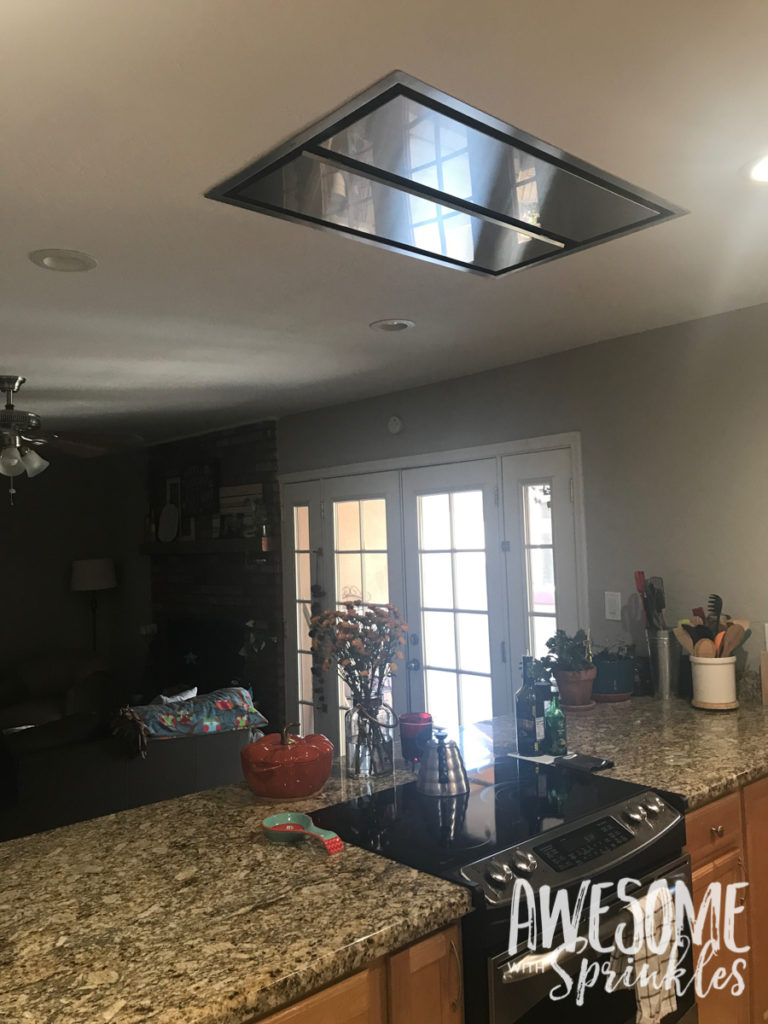 Another really cool feature we added was this flat range hood. After taking the microwave out we really didn’t love the idea of obstructing our space again, even if it was with something pretty and functional. The appliance sales guy recommended this flat style hood, which we had never even heard of before. They only work over islands/peninsulas and only for 9 foot or lower ceilings, which for us it was perfect!! 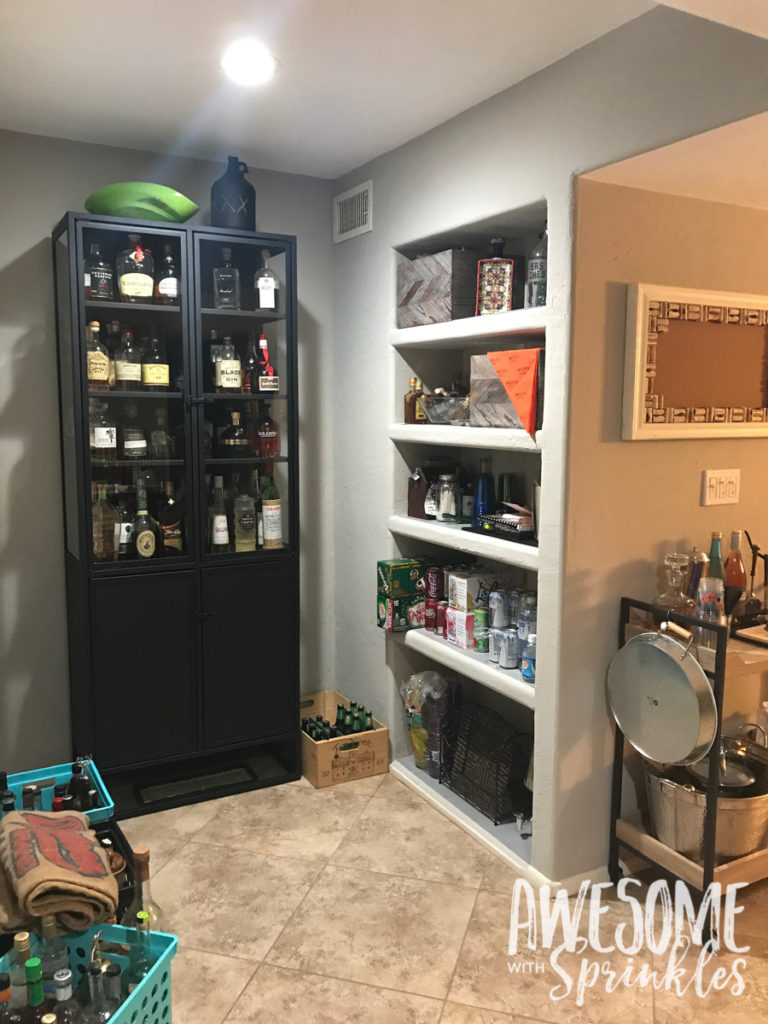 Another challenge we had was finding a suitable piece of furniture to hold our booze collection. We needed something that was sturdy enough to hold 100s of pounds of glass and liquid gold and I wanted something with doors. In all of those extra weeks we still hadn’t found anything until Miss Liz stumbled across this gorgeous metal cabinet. We still have some weeding out to do but it’s coming along. 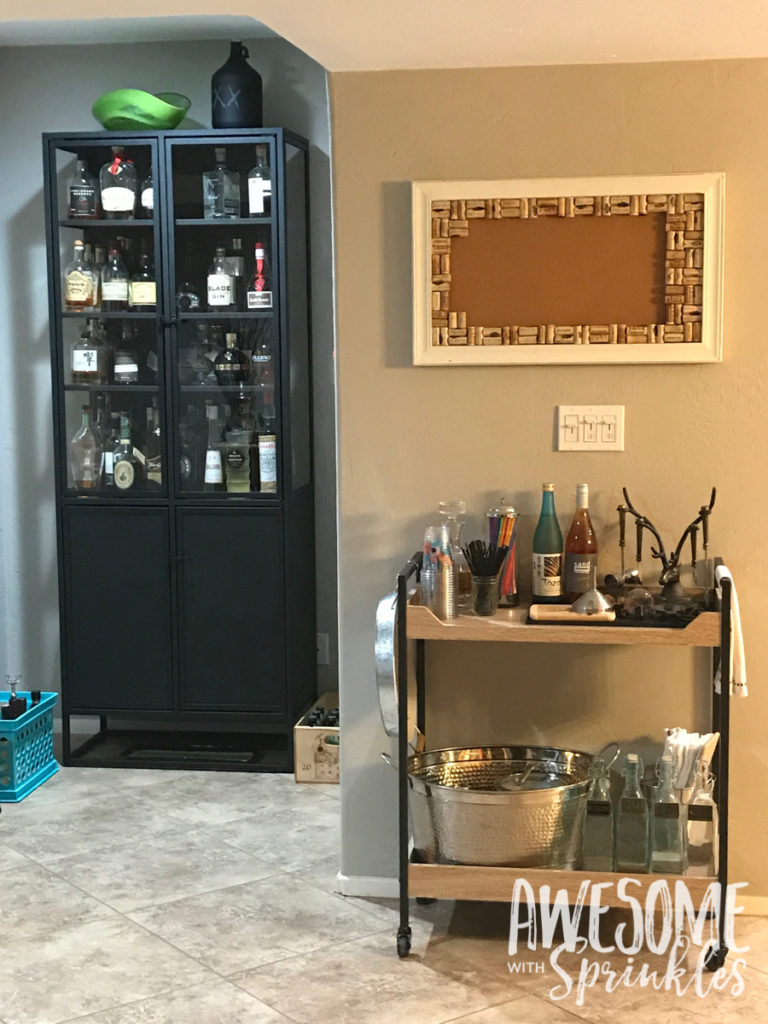 I’m still working on filling up my wine cork board, but I love it’s new home by the “bar”. 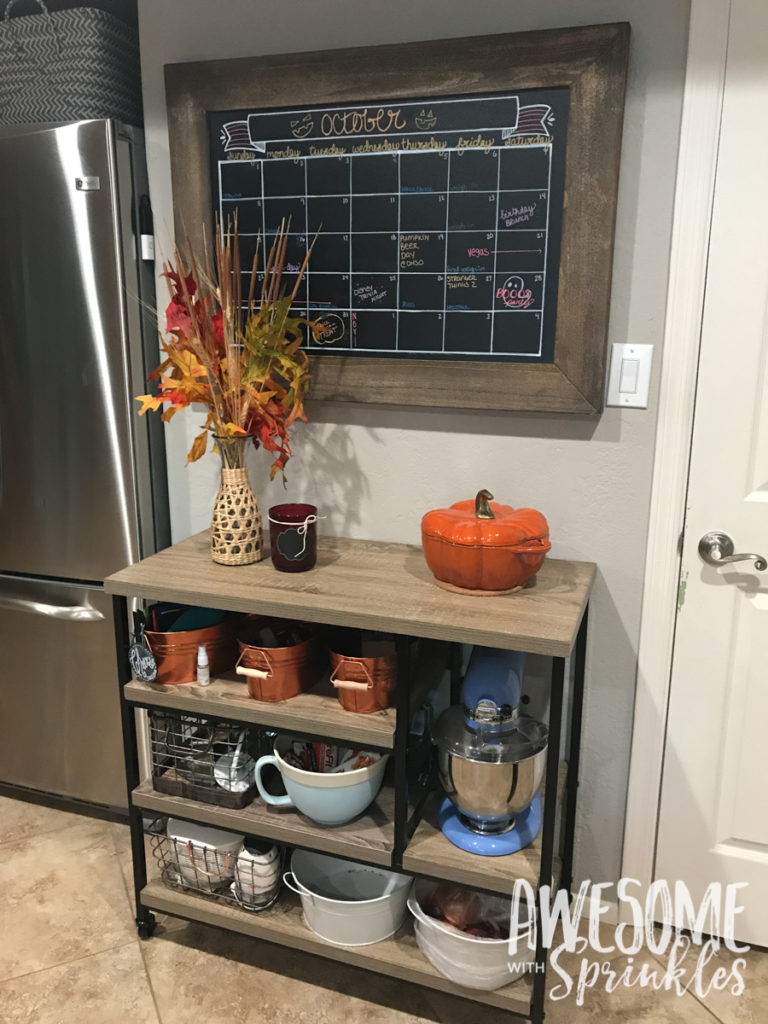 UPDATE: The latest new feature that I crafted is my new chalkboard calendar which replaced an old white board one. The calendar lines are done in paint marker and I can use chalk markers to write in all my events for the month without fear of the lines being erased. Cornelia (my Kitchen Aid mixer) also has a new home in this perfect kitchen rack I found on Wayfair.com 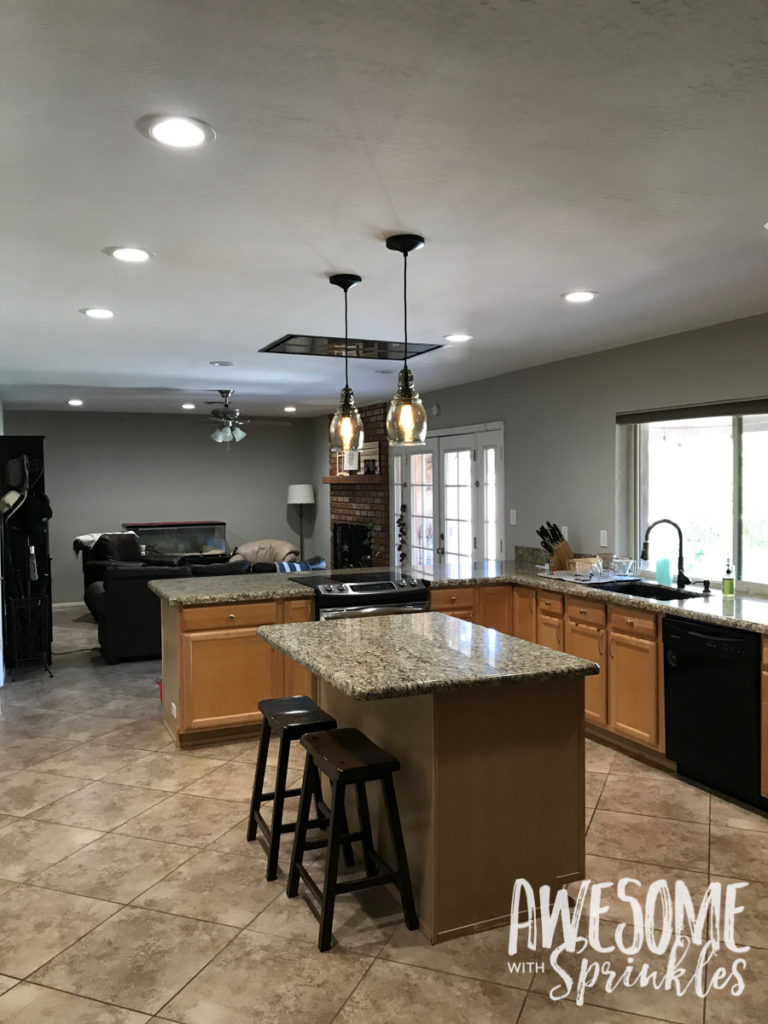 Other than having to make coffee in the bathroom and eating WAY too much take-out, the week went fairly smoothly. Though by this point it was now mid-July and we were supposed to have been done weeks ago.

Construction wrapped TWO DAYS before we left for a quick trip to Seattle (The Boy had to go for work and I got to tag along) so we didn’t have much time to put our house back together so it had to wait until we got back. Talk about stressful!

A quick trip to the PNW 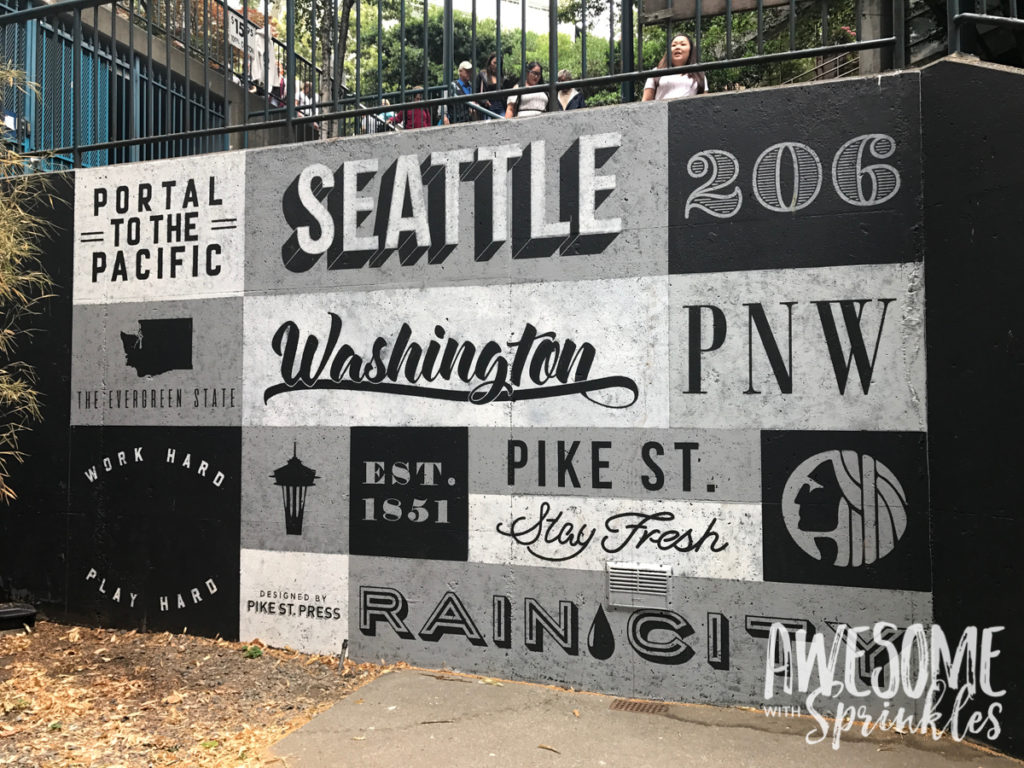 Seattle was a very nice (and much needed) break. While Jonny was at work, I spent a lot of time wandering the Market… 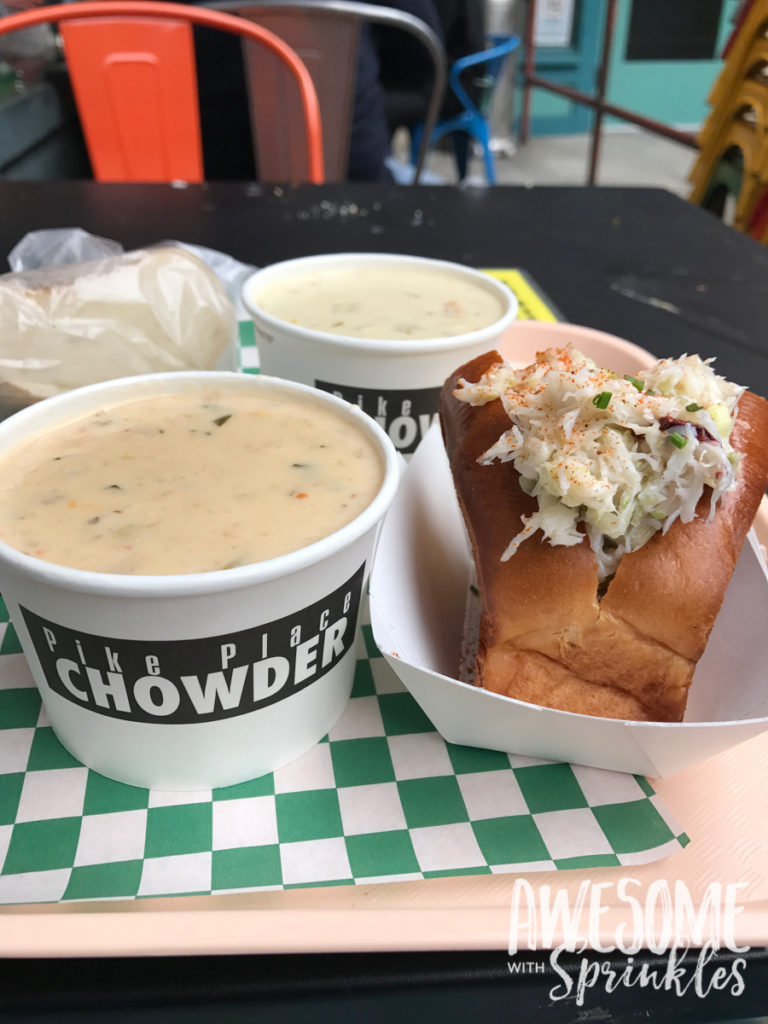 …eating all the things… 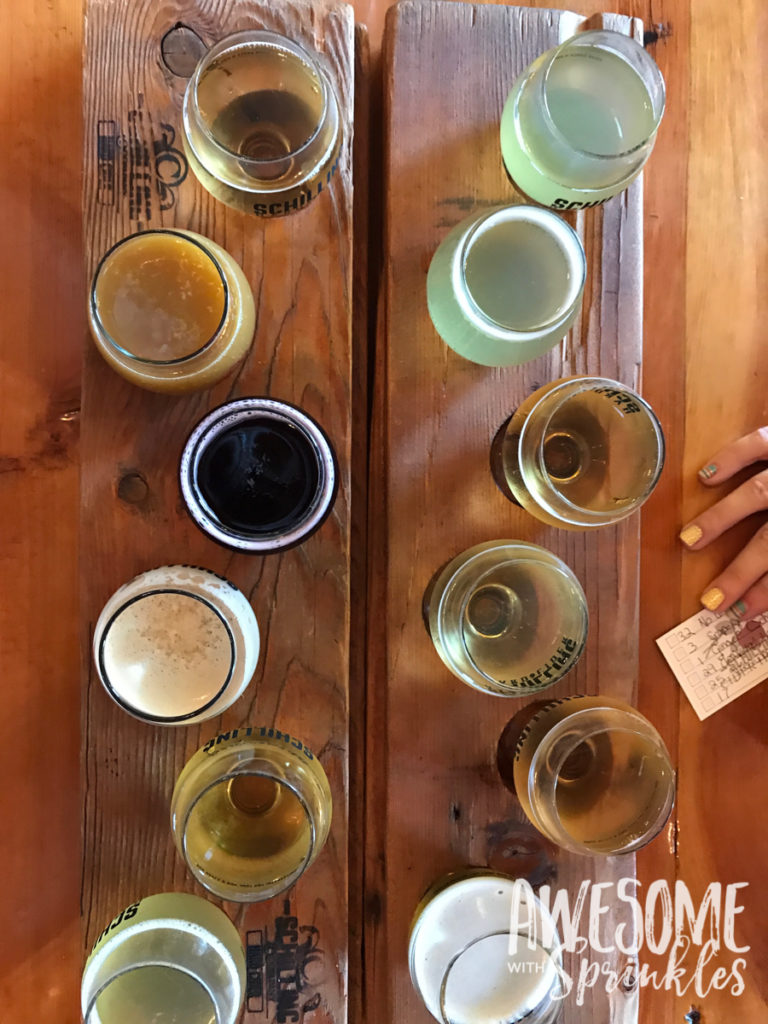 …drinking all the things… 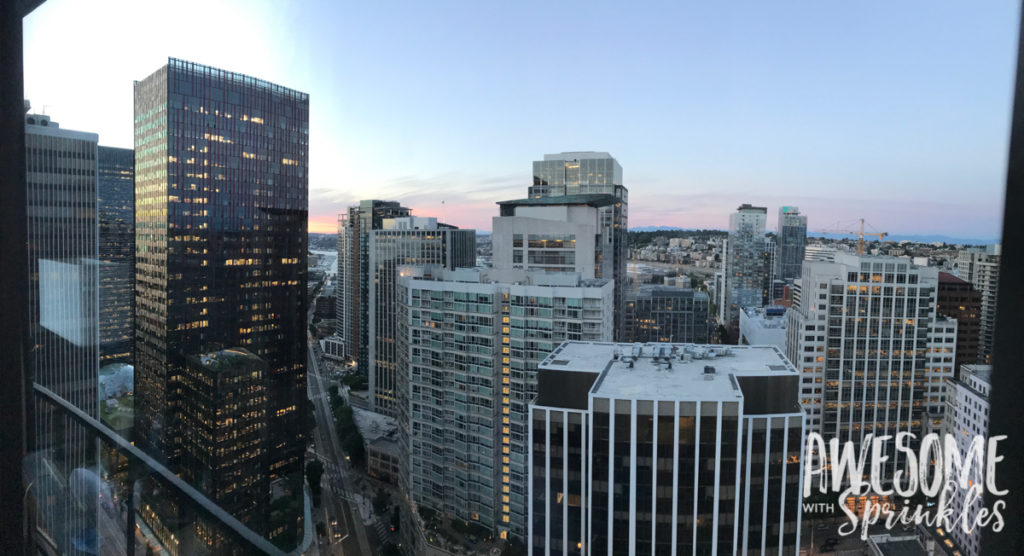 …and watching Shark Week on Discovery Channel from our swanky hotel room! #sorrynotsorry 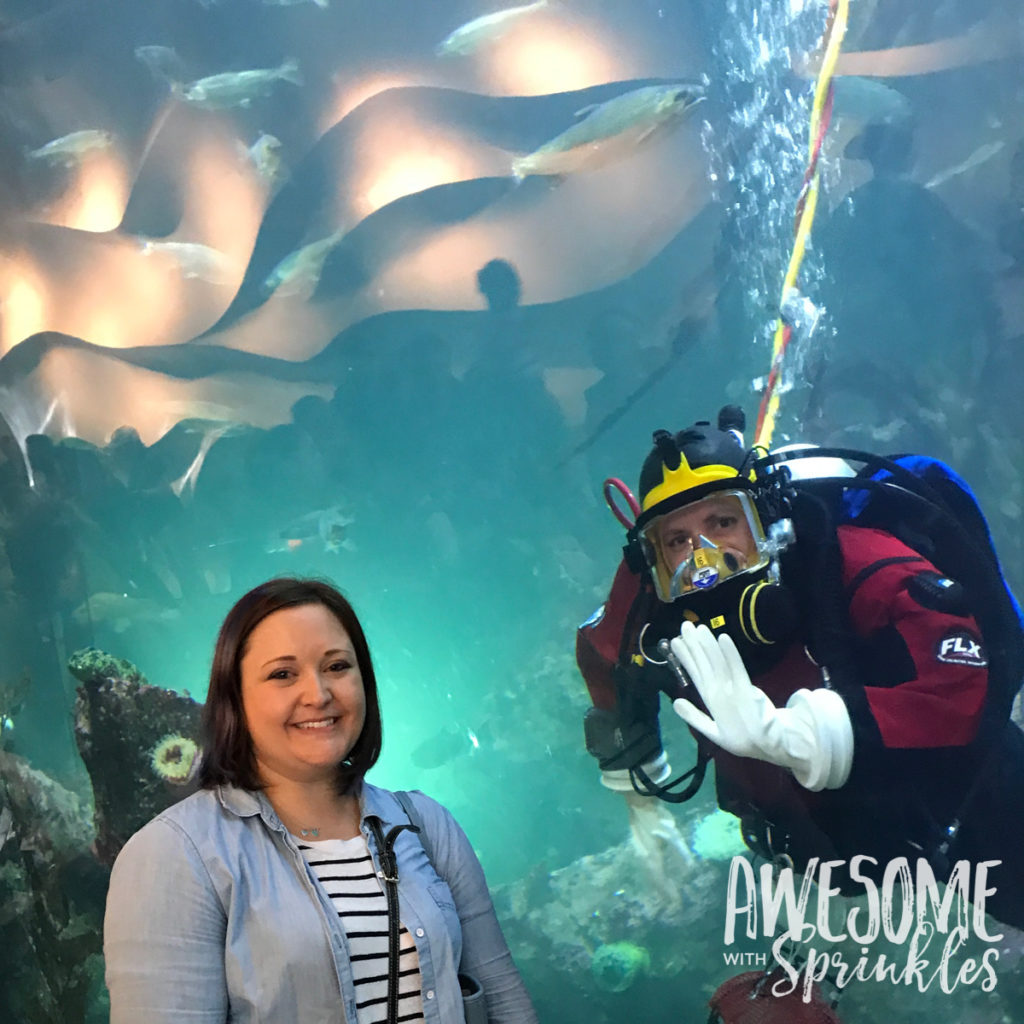 One of my favorite wanderings was through the aquarium. They had these cool dive tanks where the divers were mic’d and we could ask them questions and they could talk to us from inside the tank. Pretty neat!

After we got back I spent most of August cleaning and setting up the new studio space. Yay! Finally! So exciting! 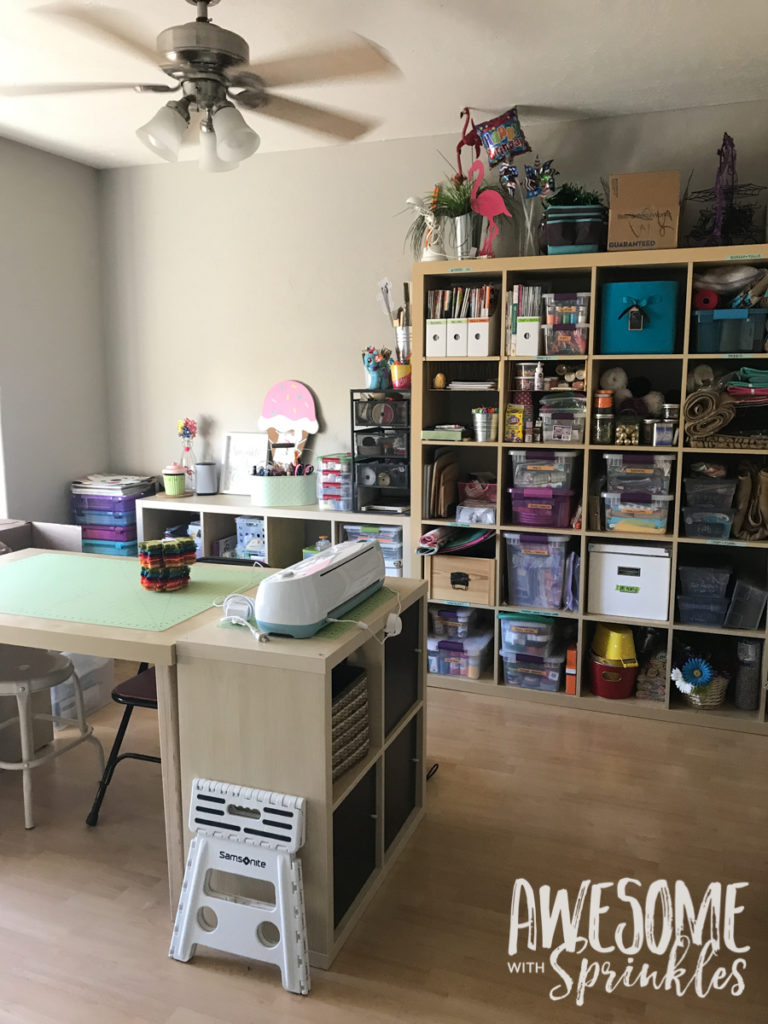 It is so nice having all of our crafty stuff organized in one place! I took the time to do a little digital housekeeping as well and the Awesome with Sprinkles website got some much needed TLC. There are still plenty of things left on the to-do list, but it is coming together. 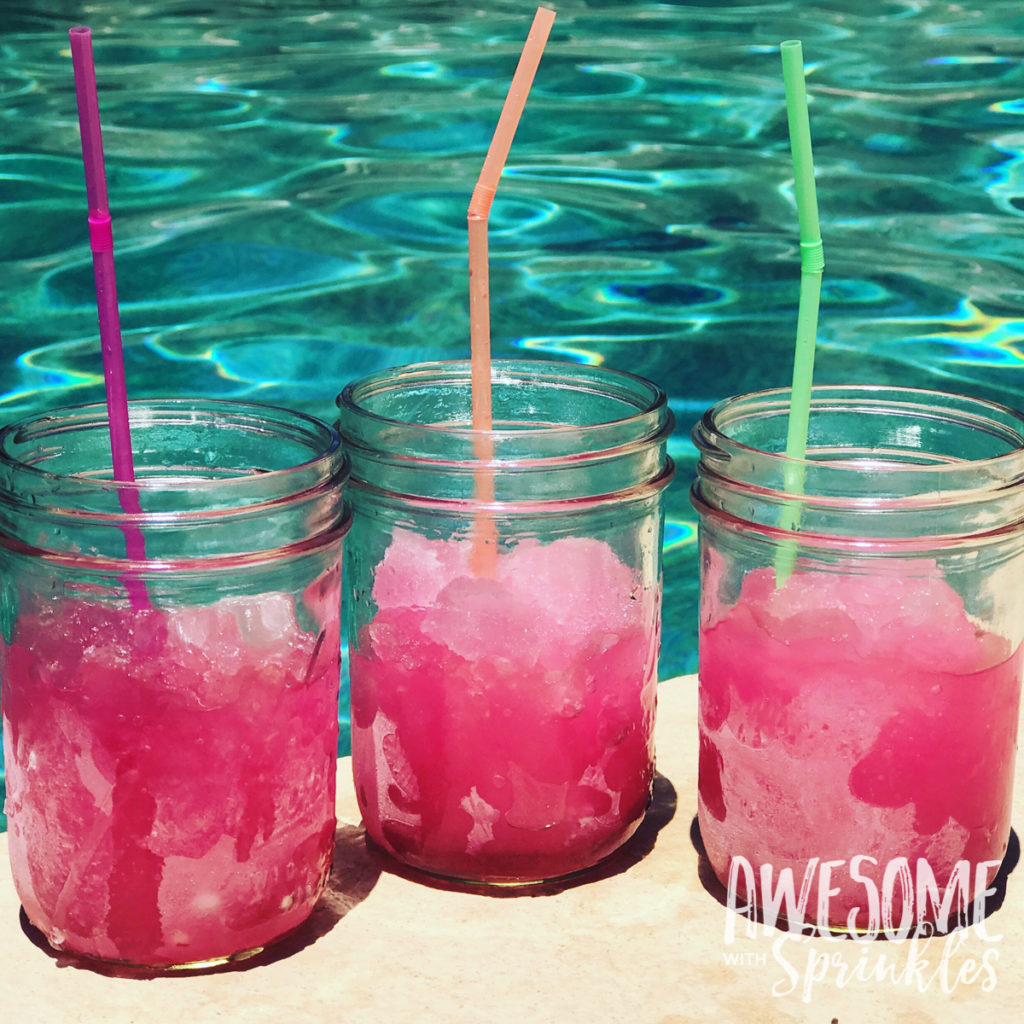 We did manage to squeeze in a few pool days and plenty of cocktails, even if I did have to dig a bottle of wine out of the buried tower of boxes in the craft room. 😉 Puh-lease, ain’t nothing keeping this girl from her rosé.

I am SO ready to put this poo tornado of a summer behind us – let’s get our FALL on! We now return you to your regularly scheduled awesomeness.