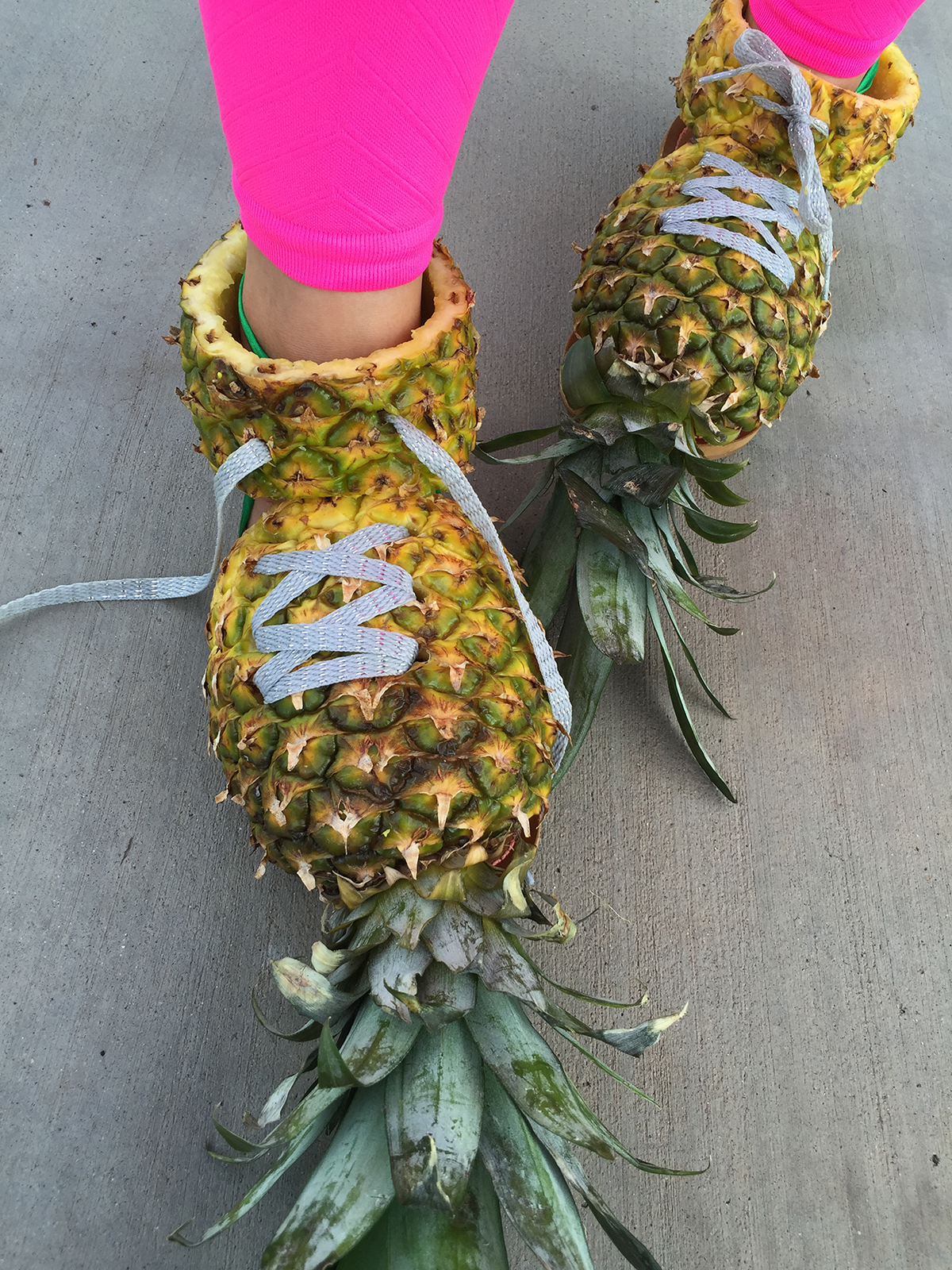 So this one time, I made running shoes out of Pineapples.

Wait…what? Let’s back this up a bit.

This year I participated in GISHWHES for the first time ever. For those of you new to this crazy acronym it stands for the “Greatest International Scavenger Hunt the World Has Ever Seen”. It’s a massive, worldwide scavenger Hunt that takes place the first week of August. Players from all over the globe form teams and compete by “creating weird and beautiful “art” online and in the world, doing crazy fun activities, and committing heartwarming acts of kindness”.

In short, it’s kind of crazy, really creative, and all sorts of silly. I had heard about it before and even helped out some Gishers last year with their crafty tasks so I had somewhat of an idea of what it was about. But this year was my first time actually playing as part of a team (Go #TeamYouCantGishWithUs!). The task list was crazy! Everything from holding a formal business meeting in a sandbox, selling bottled air, spreading messages of kindness, and fundraising for charity, to handing out treats dressed as the Dessert Fairy, hula hooping on the deck of a warship, and of course pineapple running shoes.

Unfortunately timing of my busy schedule didn’t allow me to complete as many items as I would have liked, but I was able to help out others with a few tasks and we still had a lot of fun doing it! 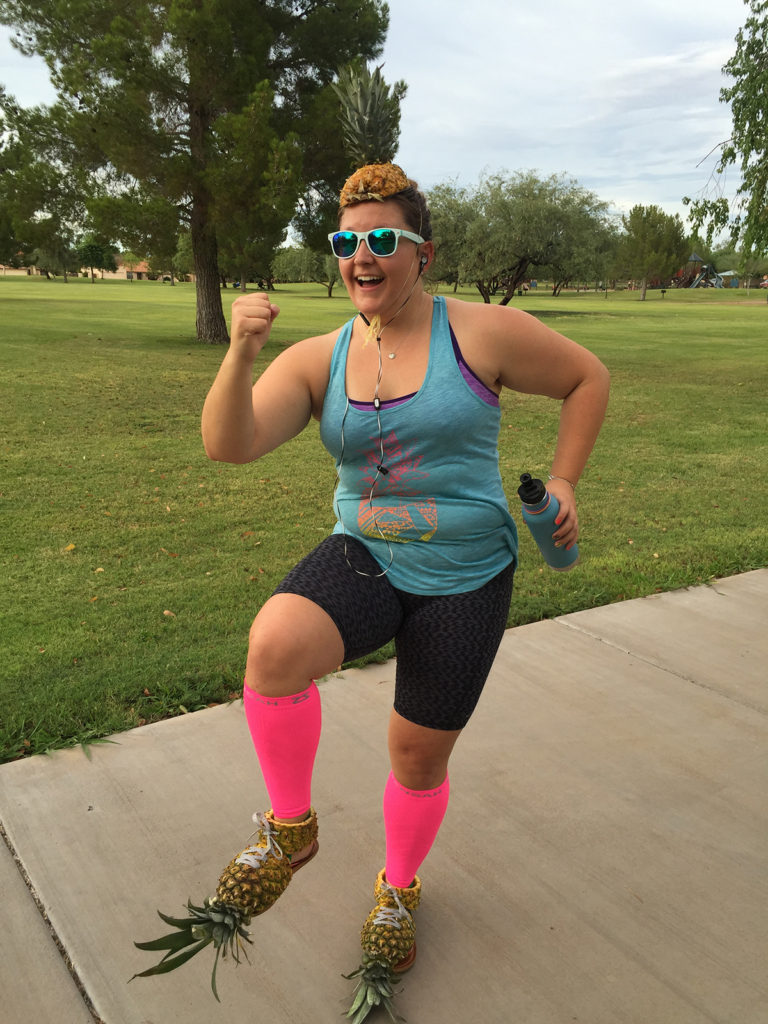 So back to the Pineapple running shoes…

Gish week is fun because for those of us who are hunting all this weirdness is just part of the awesomeness, but for those who have no idea what is going on, well, it makes for some great reactions from non-gishers.

Like my friend Lainey who, unbeknownst to her at the time, was going to help me take video of my fashionable pineapple running shoes (with glitter laces!) before our dinner date that evening. So when she walked in to find me lacing up a pineapple, she stopped mid-sentence and just stared at me like I had finally lost my damn mind. I am known to do some pretty silly stuff on a regular basis, but this… this was just a little too much even for her to comprehend.

She is such a good sport though and happily drove me to the park and helped me take the video. We ran into a few bystanders that either gave us a wide berth or laughed with us (at us, most likely) and inquired as to what the heck we were doing. We even had one person ask if it was something we were doing for Pokémon Go (seriously…Pokémon people are everywhere).

By the time we got home we were covered in sticky pineapple juice and in stitches from laughing so hard. Then we proceeded to laugh our faces off for another hour while we edited the video after dinner. Seriously… who would have thought slo-mo running in pineapple shoes to the song “Escape” would be so hilarious. See for yourself.

Things I learned while completing this task

When you submit your tasks, Gishwhes asks you to tell a little bit about what you learned while completing your task or how it impacted you. My take-aways were these:

Here are some of the other tasks that I completed or helped with for the Hunt. I’m not even going to explain them in length because the WTF factor is just too high, but here are some funnies for your viewing pleasure.

Task: Have a child under 7 choose your outfit, do your makeup, and fix your hair. Then go grocery shopping with them. 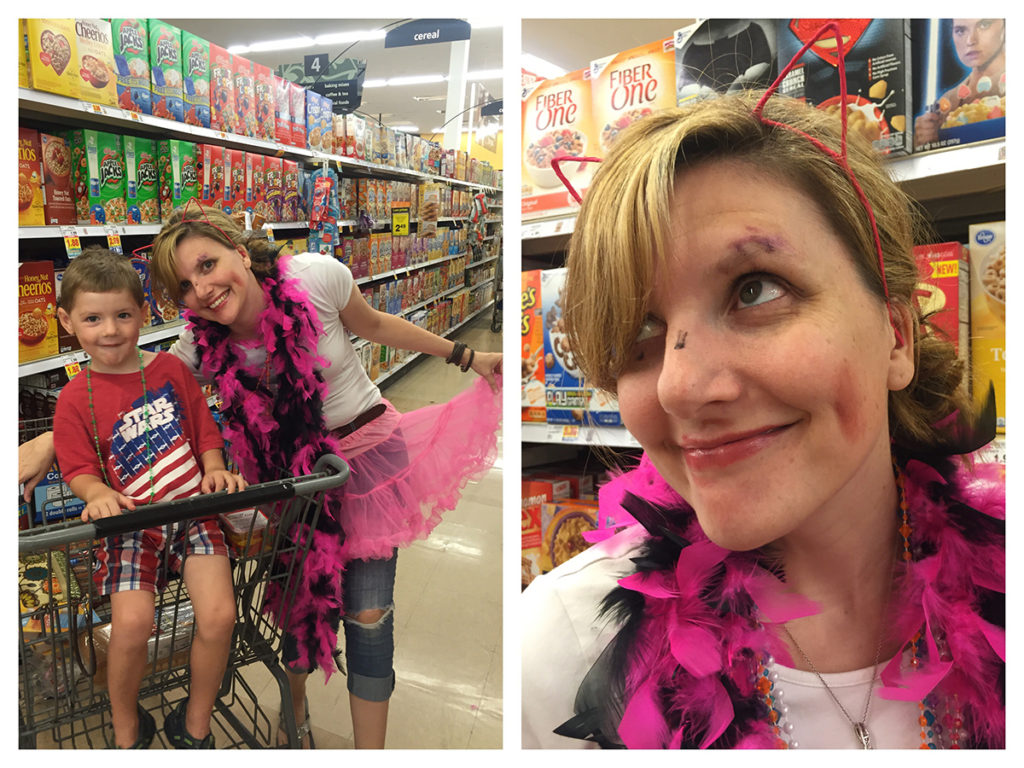 This is what Detty likes to do when she isn’t crafting. (Hi Detty! *waves*)

Task: Dress up as a Bellossom or other grass-type Pokémon and plant some beautiful blossoms at a nearby Pokéstop 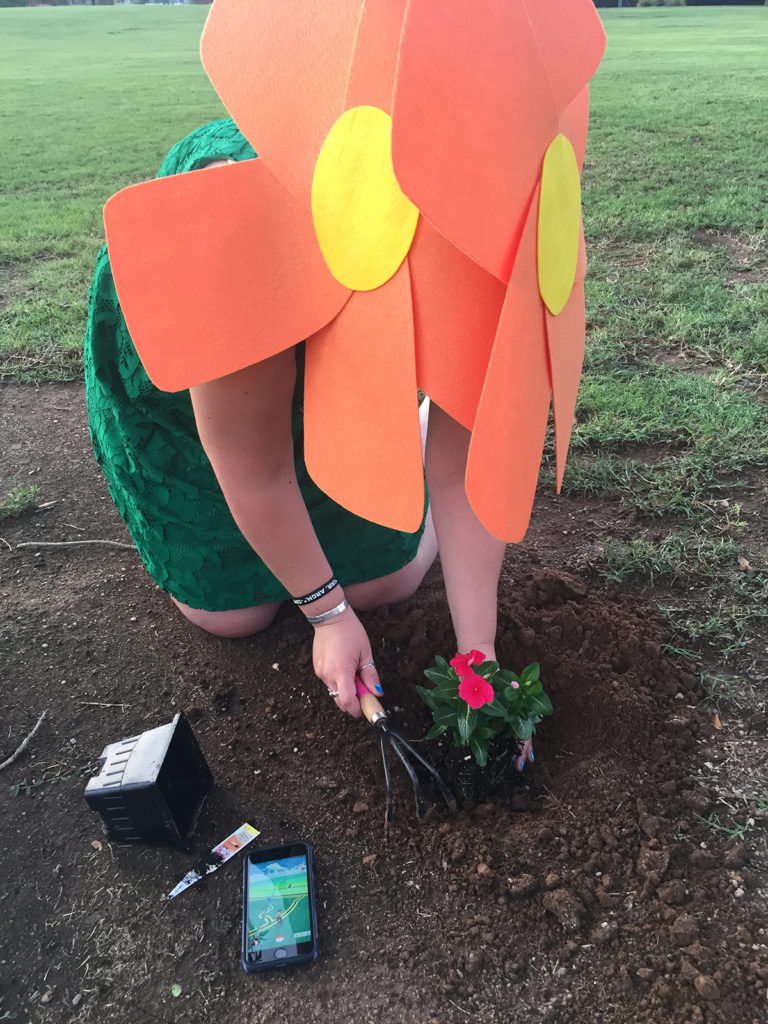 My bestie Sami makes a pretty cute Bellossom doesn’t she? This time it really WAS a Pokémon related task!

Task: Using nothing but forced perspective and a disproportionately large, “weird, unusual or scary” object that you wouldn’t want to be smaller than, make yourself look tiny. 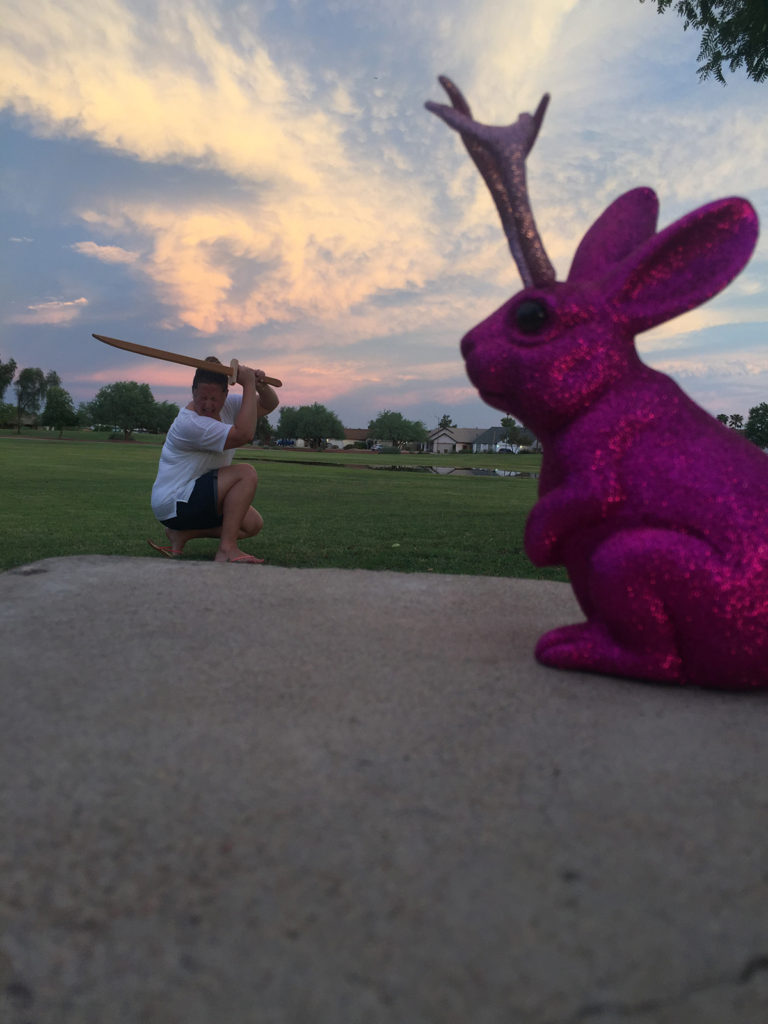 Because giant glittery pink jackalopes would be legitimately terrifying. Can you just imagine the glitter bombs?

And finally, my personal crowning achievement for the Gishwhes season…

Task: Your pet has just released their first, much anticipated, heavy metal rock album. Show us the cover art. 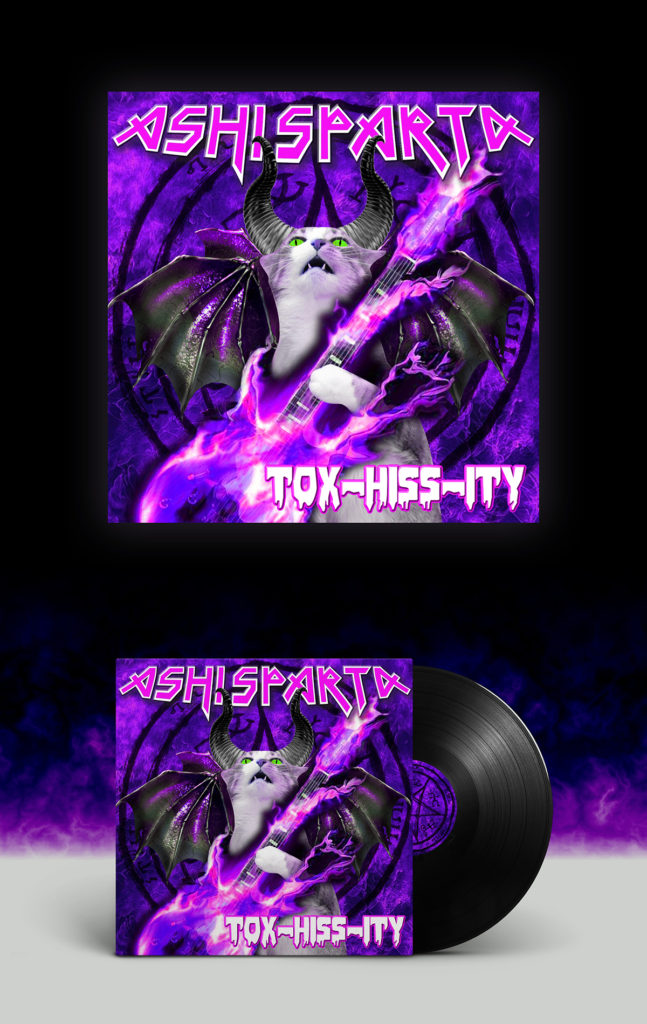 Because vinyl is the only way to rock. Thank you Ashi Sparta for modeling for the photoshoot and being my inherently evil inspiration. Put your paws up and epic ballad on, little kitty. (Seriously… I think I might frame this one.)

And that’s a wrap! Judging takes place over the next few weeks so wish Team You Can’t Gish With Us luck! If you think you might be interested in joining the GISHWHES hunt next year, then add a reminder to your calendar now (and maybe consider taking a few days off that week :P). Team registration usually starts in late April and the hunt starts the first week of August. Go forth, and be weird, my friends!

P.S. If you are looking for something a little more practical to do with your pineapples, then I highly suggest this amazingly delicious Pineapple Crush Cake.