Who has seen Stranger Things on Netflix? Oh. Em. Goodness. I absolutely LOVE this show.

It’s a fantastic story with the perfect amounts of mystery and horror, and the cast is amazing! It’s a nostalgia filled road trip with everything you loved as an American kid growing up in the 80’s, when all you had were walkie-talkies and your bike to keep in touch with your friends. It’s right up there with E.T. and The Goonies, and though the graphics might be better, it has the same feeling of that era. 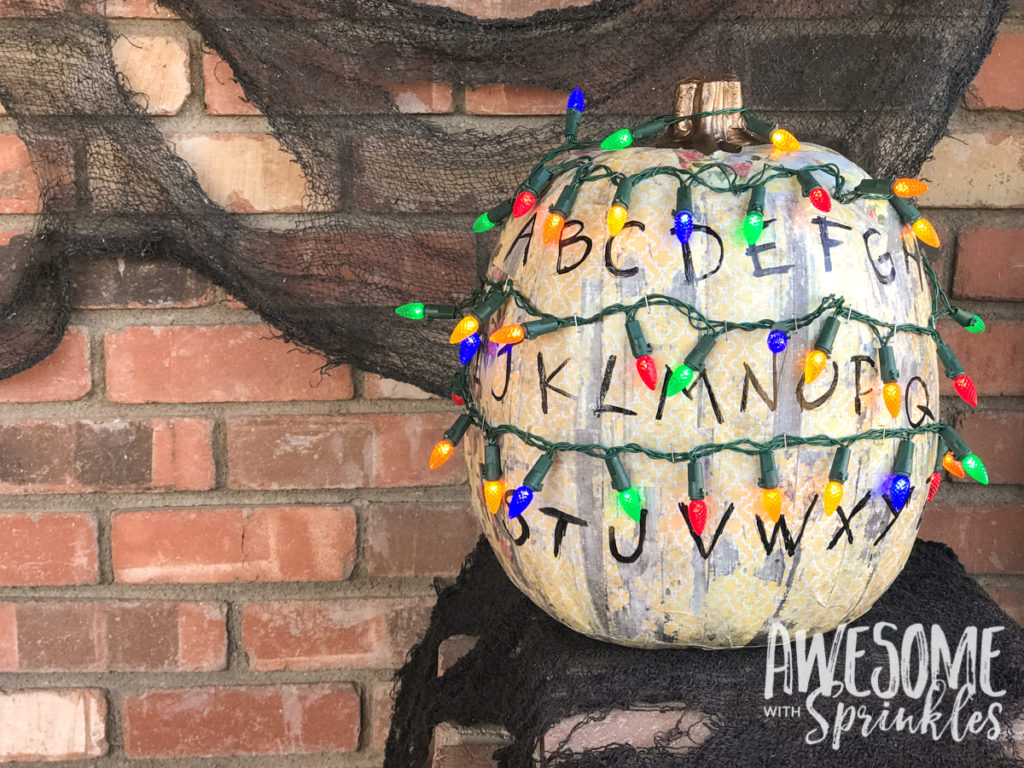 For those of you who have seen the show, this craft will be instantly recognized. For those of you who haven’t, you might be wondering why the hell I wrote the alphabet on and stapled Christmas lights to a pumpkin. All I can say is watch the show (it’s only 8 episodes, you can do it!). It’s worth it, I promise. Friends don’t lie.

Stranger Things Season 2 releases just in time for Halloween this year and we are going to be ready to celebrate! To me, Halloween is all about decorating pumpkins and what better way to pay homage to my favorite Octoberween show than to decorate a pumpkin for it! Behold! My take on the Stranger Things Alphabet Wall Pumpkin! 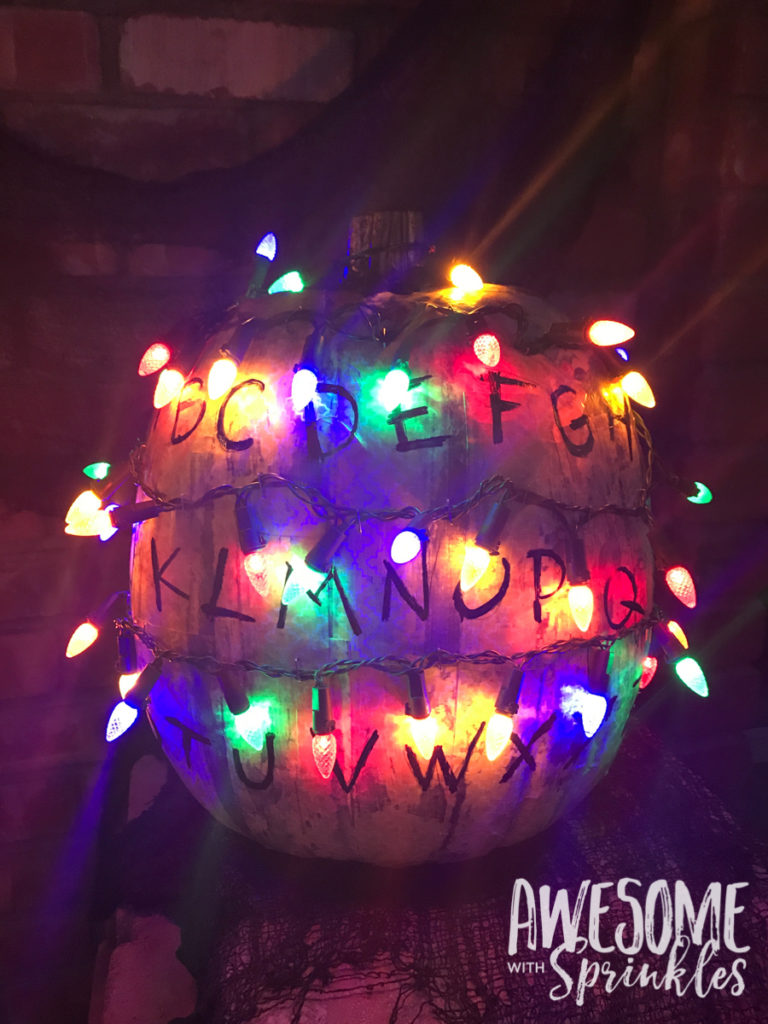 You can start with a basic white faux pumpkin (or paint one white) but I went a little crazy with this craft and decoupaged my own pumpkin to look like the wall of the Beyer’s house! 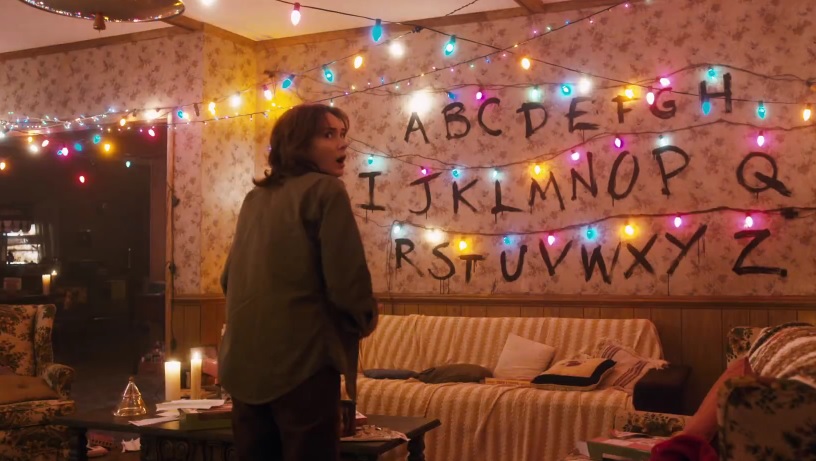 I searched several different craft stores to find the perfect yellow floral print paper (I am nothing if not a perfectionist) but I couldn’t find anything that I loved so I settled for this distressed yellow paper that I had at home that was close in color. I loved the “gritty” look that it had and I felt that that it added to the style! Learn how to decoupage your own pumpkin (or whatever you want!) with my handy tutorial! It’s super easy! 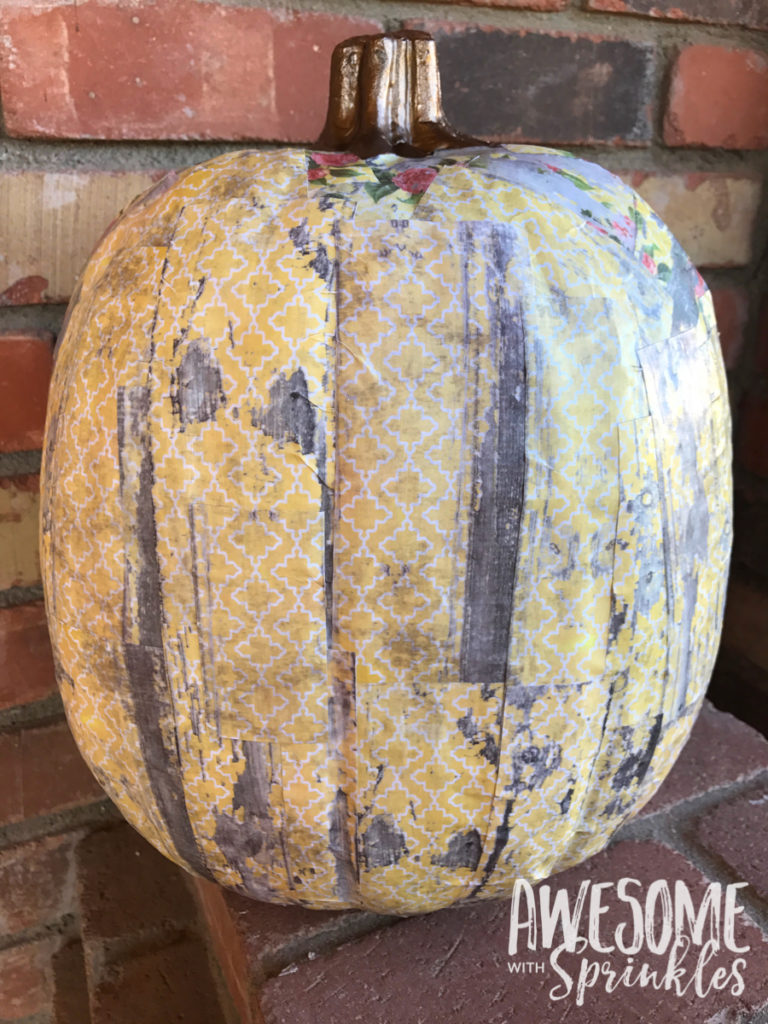 It even turns into wood panelling on the back side, just like the hallway of the house! That was a happy accident due a shortage of paper. Hahahaha! 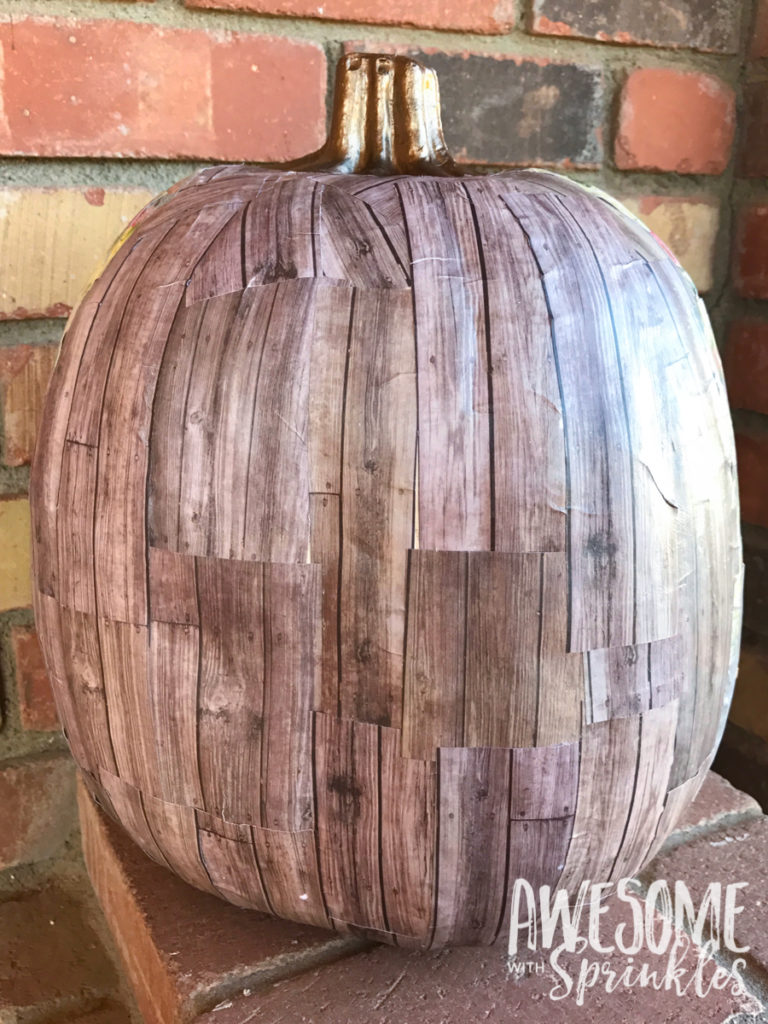 It’s time to go back to grade school (which in my case was in the 80’s! haha!) and messily draw the alphabet. 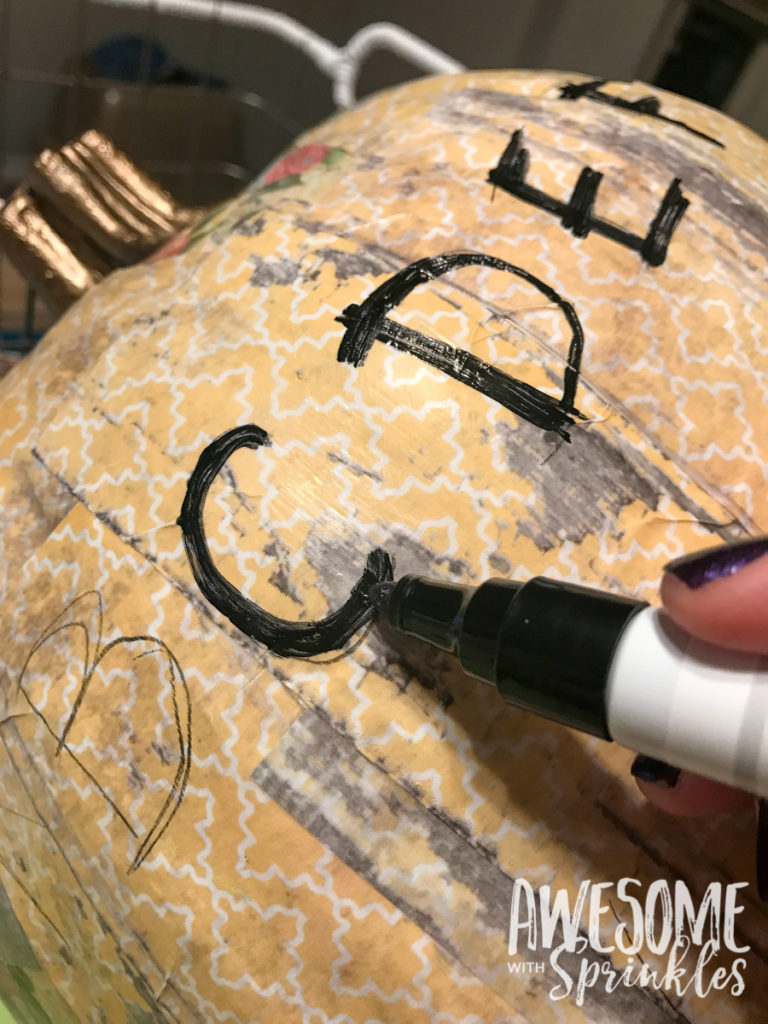 I used the picture above as a reference for spacing and shape. First I penciled in the letters and then went back over them with a paint marker. The messier the better in this case. 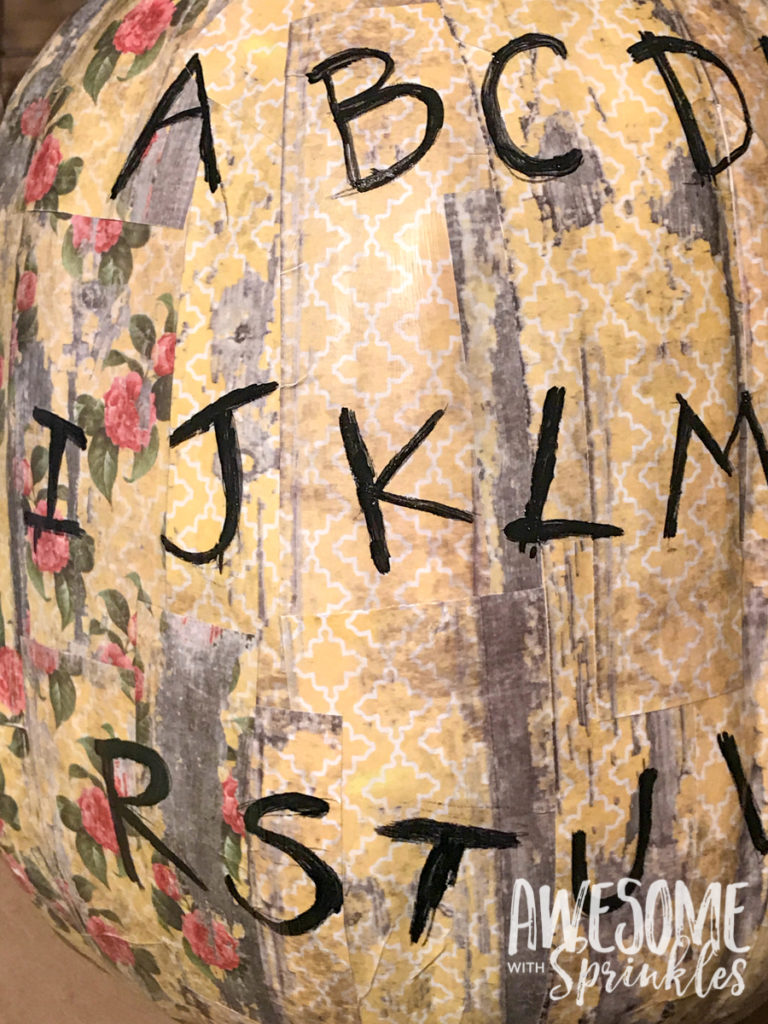 Grab your staple gun and your Christmas lights…it’s time to channel your inner Clark Griswold! Buahahahaha! 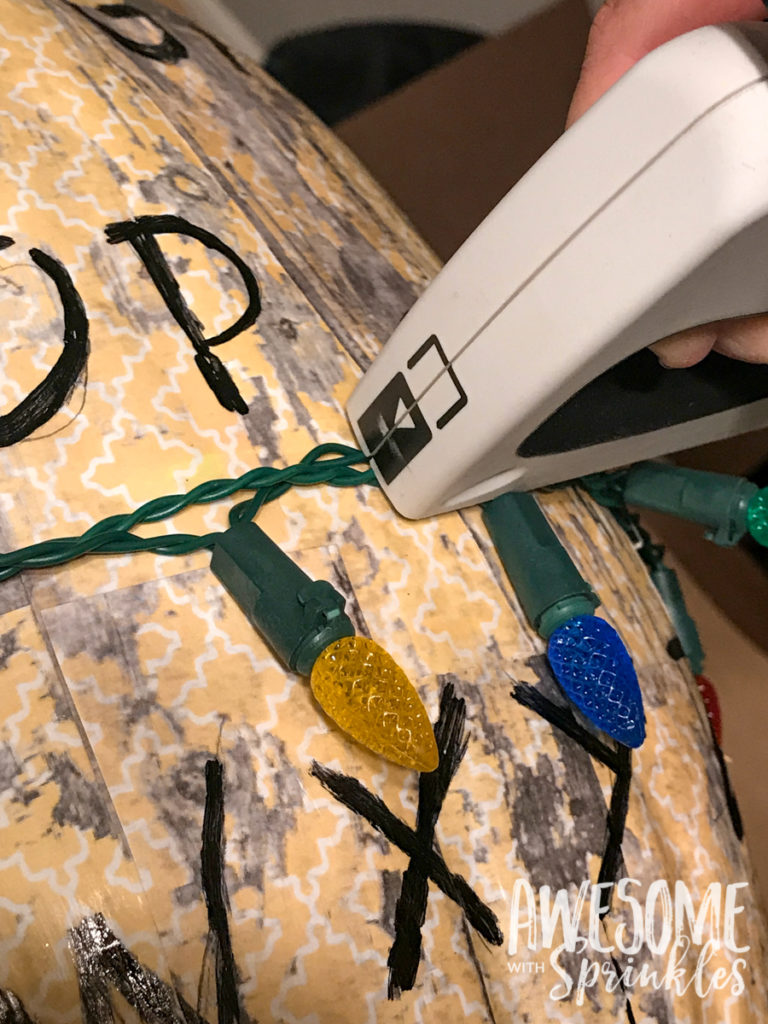 CAREFULLY staple your Christmas lights to your pumpkin, being sure to avoid the wires with your staples. I used an upholstery staple gun and found these little battery powered C3 Christmas lights at Target that were perfect! They had 20 lights per strand so I used two and twisted them together. 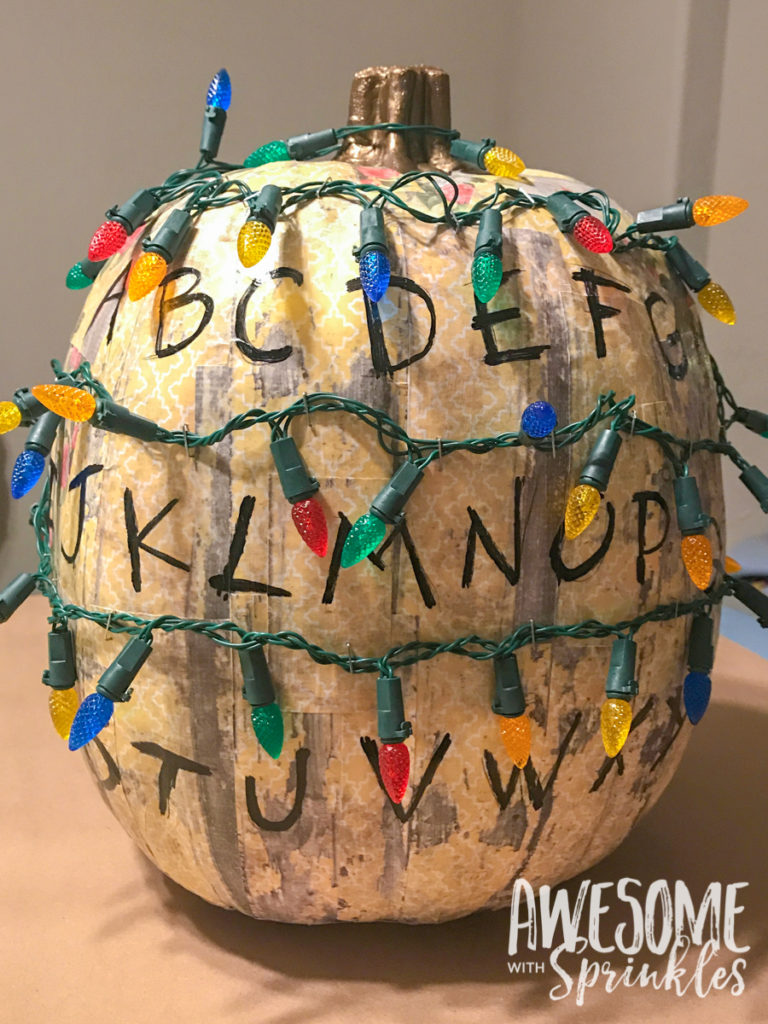 Now you could just as easily wrap some lights around and staple them to the pumpkin and you would totally get the idea across and it would still be great! But I really wanted it to be authentic (that perfectionist again) …so I took the time to line up the lights to each letter. 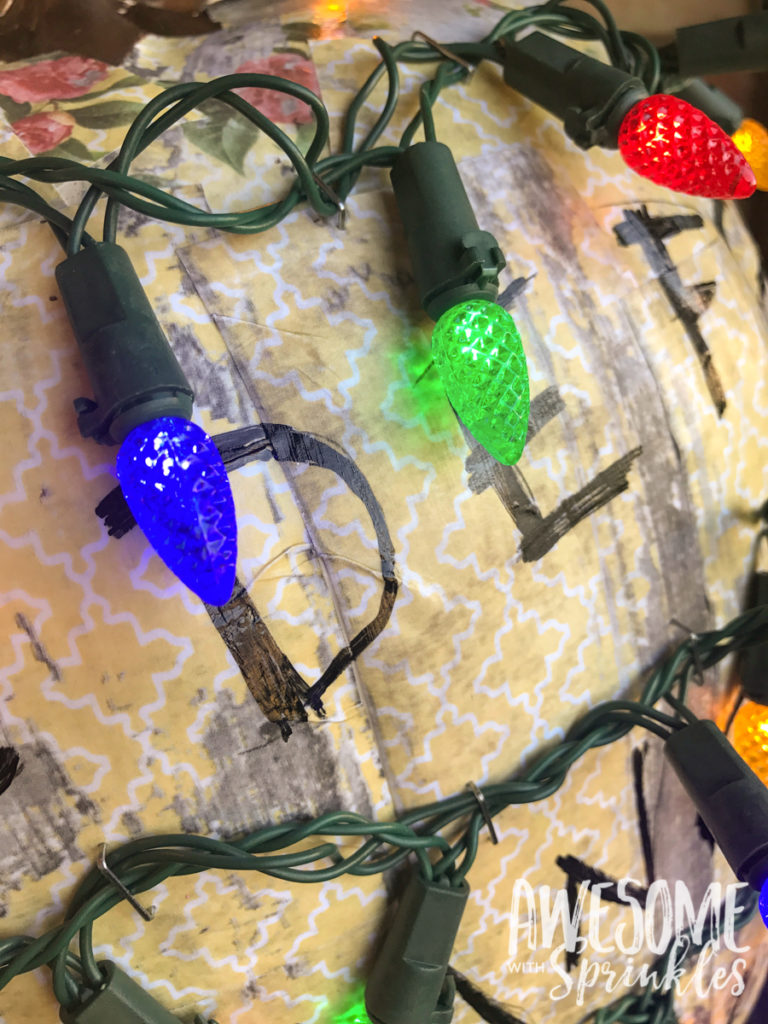 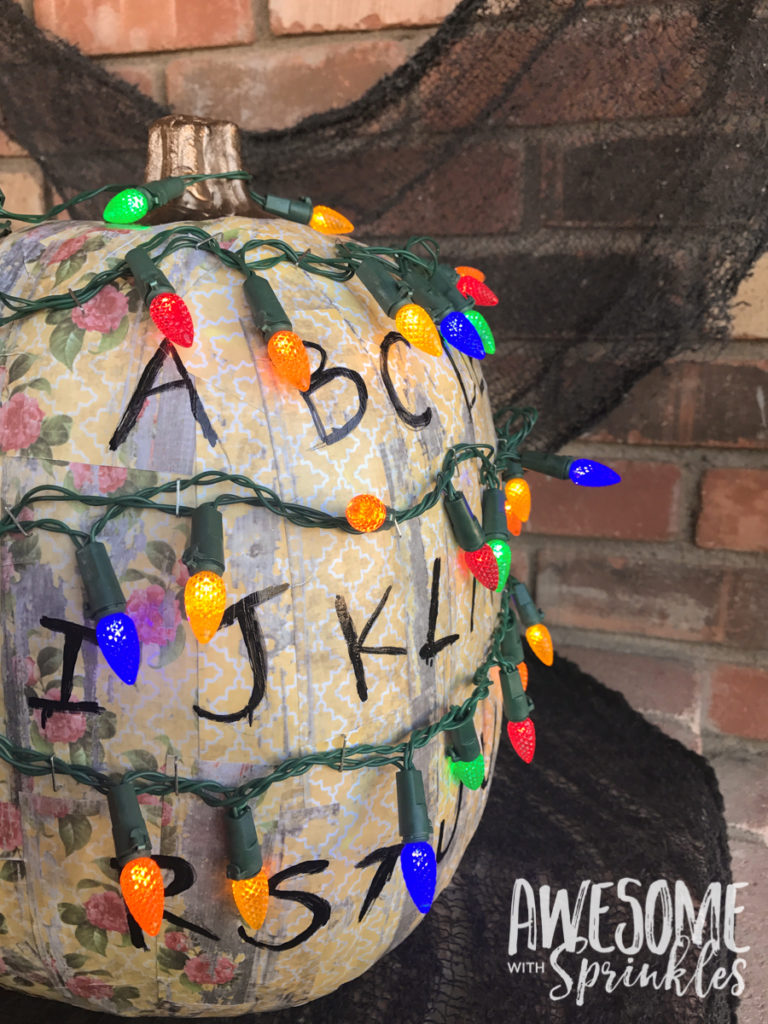 It was SO worth the effort because this pumpkin is AWESOME! It makes me grin just like Dustin every time I see it!

That’s it! Your Stranger Pumpkin is ready to go! Use it to communicate with your friends in The Upside Down…or just creep out the older crowd when they come to trick-or-treat. 😉 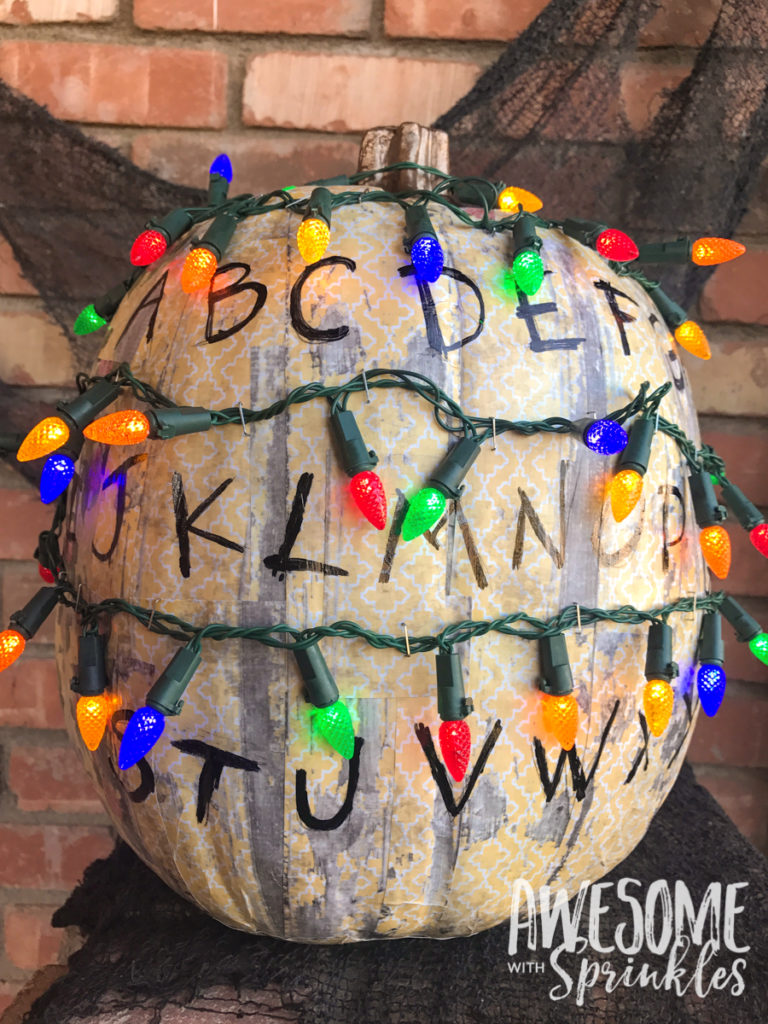 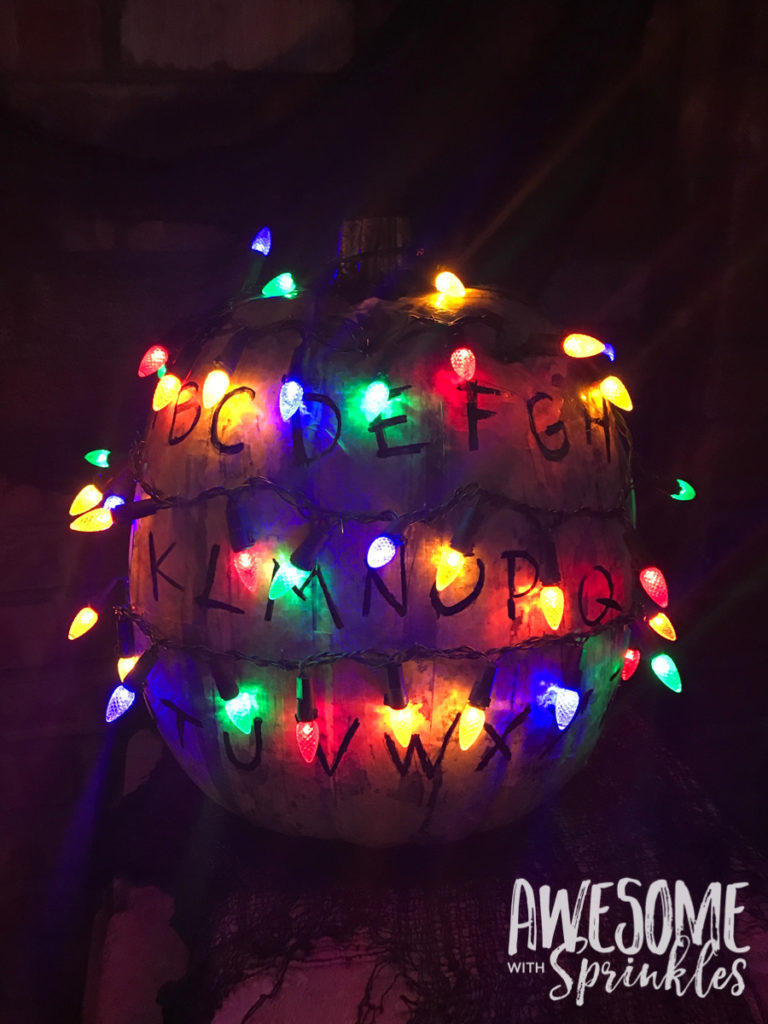 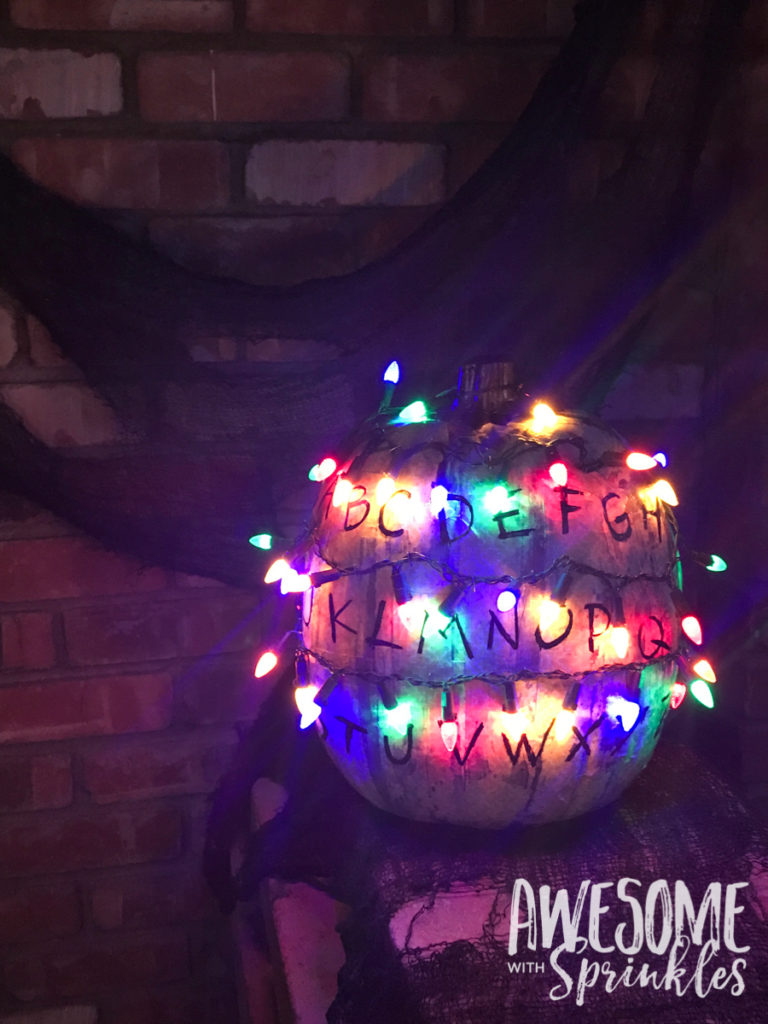 If you are looking for more Octoberween viewing goodness while you wait for Stranger Things Season 2 to drop at the end of the month, I highly recommend Monster Squad. It’s a lesser known gem that is in the same vein as The Goonies and Stranger Things, which you can also find on Netflix (at the moment).

*Inspired by lovefromtheoven.com (love the Eleven costume too!)