It’s that time of year again when I feel stuck in a food-rut. One of the bloggers I follow had a promo code for $30 off of your first box of HelloFresh. The recipe she shared looked so good – this lemon pasta dish. I had to try it!

Honestly, her post was a bit misleading (or I need to read more carefully!!!). At first I thought this service sent pre-cooked ingredients that just needed to be warmed up – and with my motivation being off the charts low lately, I needed all the help I could get to eat a fresh and (mostly) healthy meal. Too many nights of chocolate cereal for dinner wasn’t helping my energy levels any.

HelloFresh is the same concept as Green Chef, and the other meal delivery kits. They mail you a box of ingredients and recipe cards for each. One of the things that was pretty cool about HelloFresh was picking a selection of 3-4 recipes I wanted for the week, out of 7 possible recipes for the week. Other meal kits, including Green Chef, are also now offering different meal options. If I don’t want the fajitas, I can get the pork chops. Some meals are considered “premium” and cost more to add to your menu. 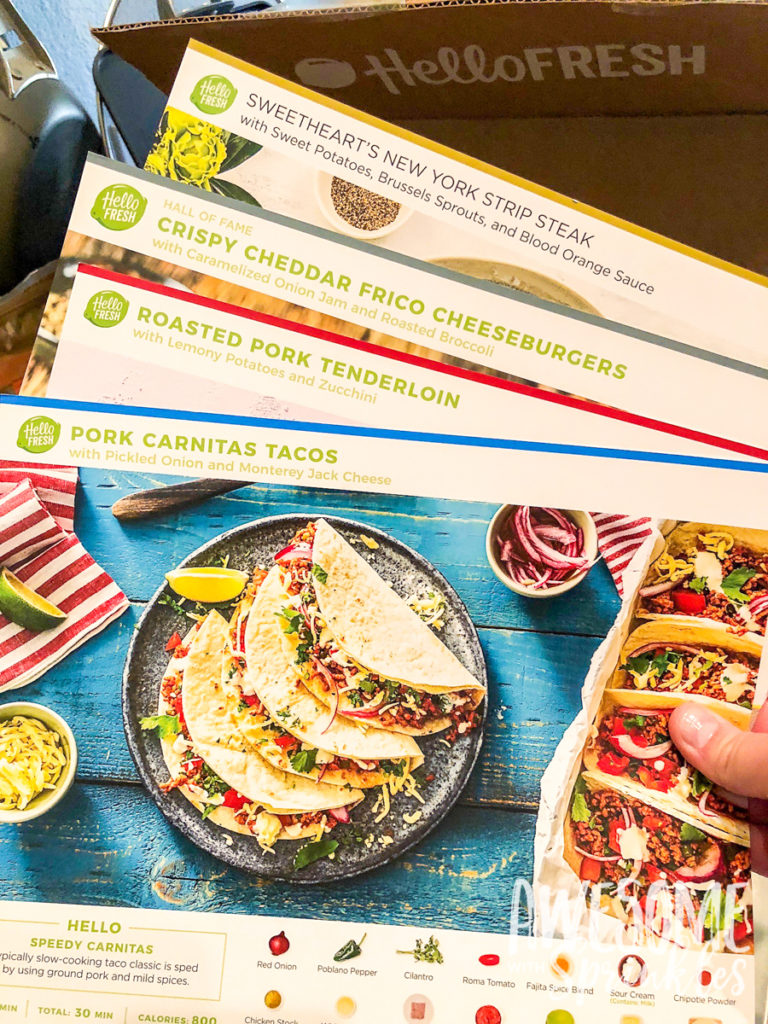 In my first box, I received:

I figured, I got $30 off, I might as well try as many meals as possible. Plus, this took care of 4 dinners and 4 lunches for me for the week and pretty much meant I didn’t have to go to the grocery store that week. #winning 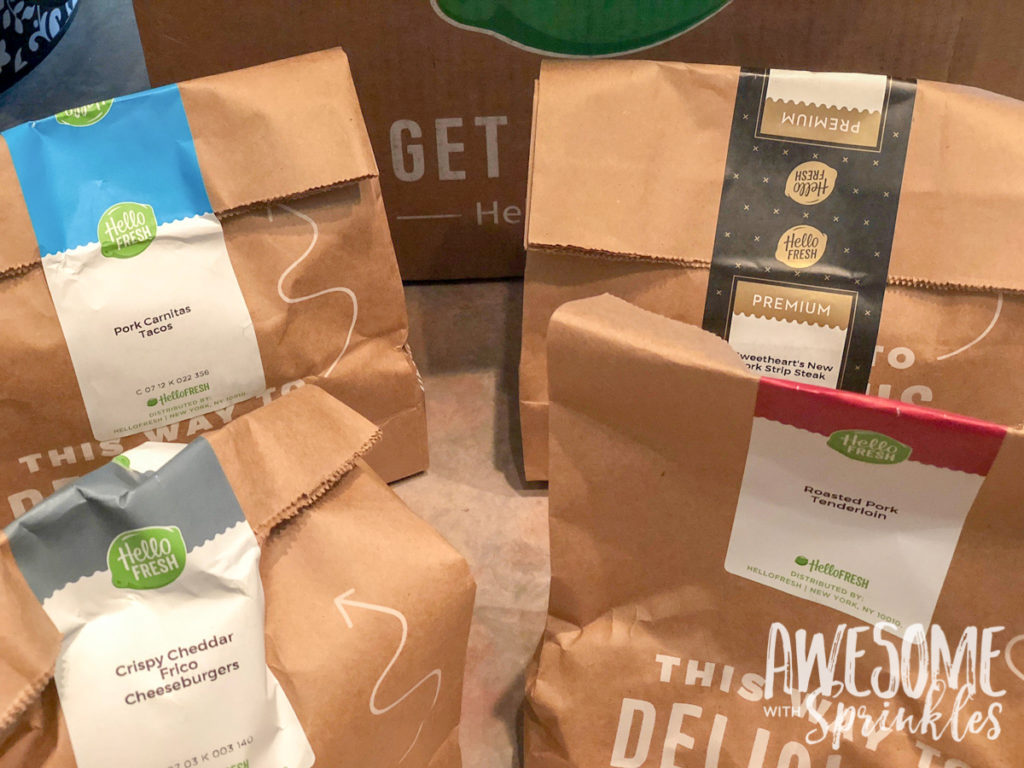 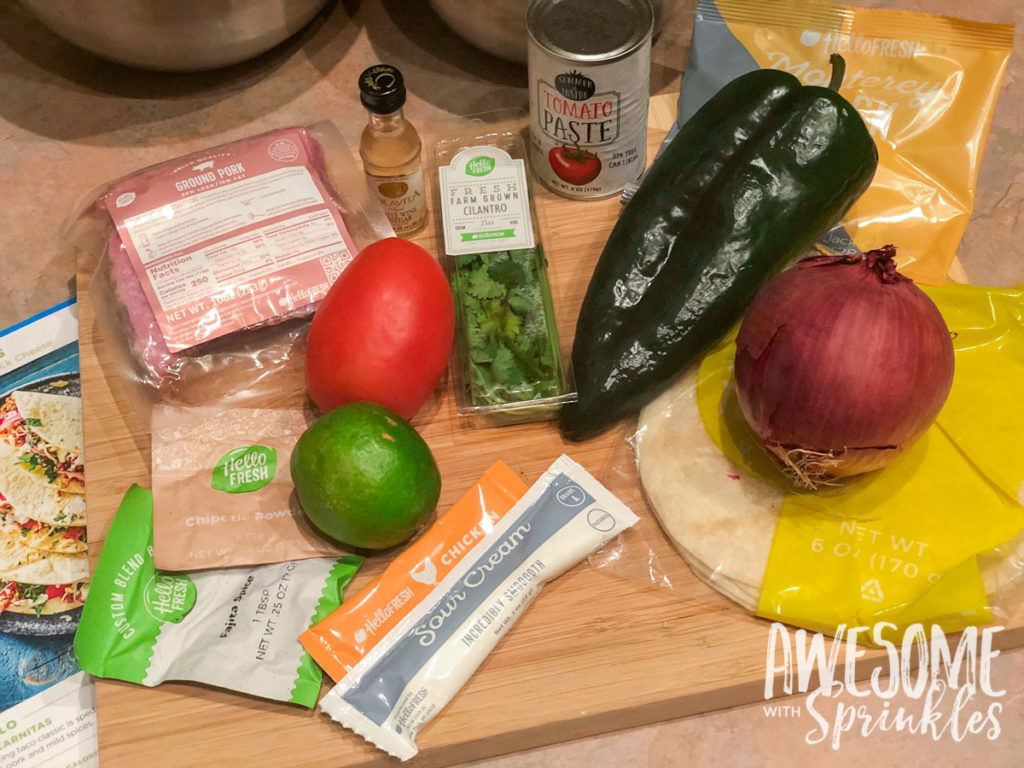 The week started off strong with this recipe. While not very original or something I wouldn’t not make for myself, it was quick and tasty. I finished in just about the 30 minutes, which included browning pork, sautéing peppers and onions, warming tortillas.

However, there was not enough brining liquid for the amount of onions, and they sent a whole (small) can of tomato paste for the 1 tablespoon that I needed. Since I had the next week of meals planned, I didn’t know what to do with the extra tomato paste, so it went in the trash. The cilantro was a bit wilted, so I tossed that too. I deviated a bit from the instructions and warmed the tortillas in the oven vs the microwave.

When I went to plate up the tacos, I noticed each serving was 3 tacos, which seemed like a lot. I made 2 slightly extra full tacos instead (plus 2 for lunch the next day). I ended up with 2 leftover tortillas and a bit of extra meat that I mixed with scrambled eggs later in the week to make breakfast burritos. 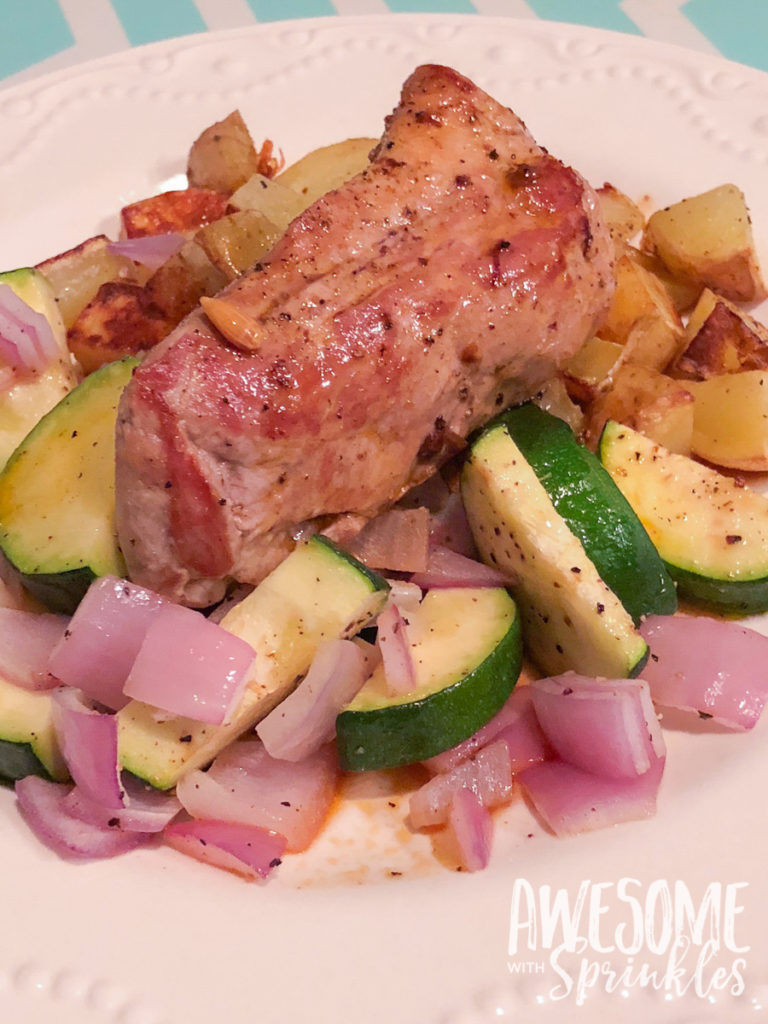 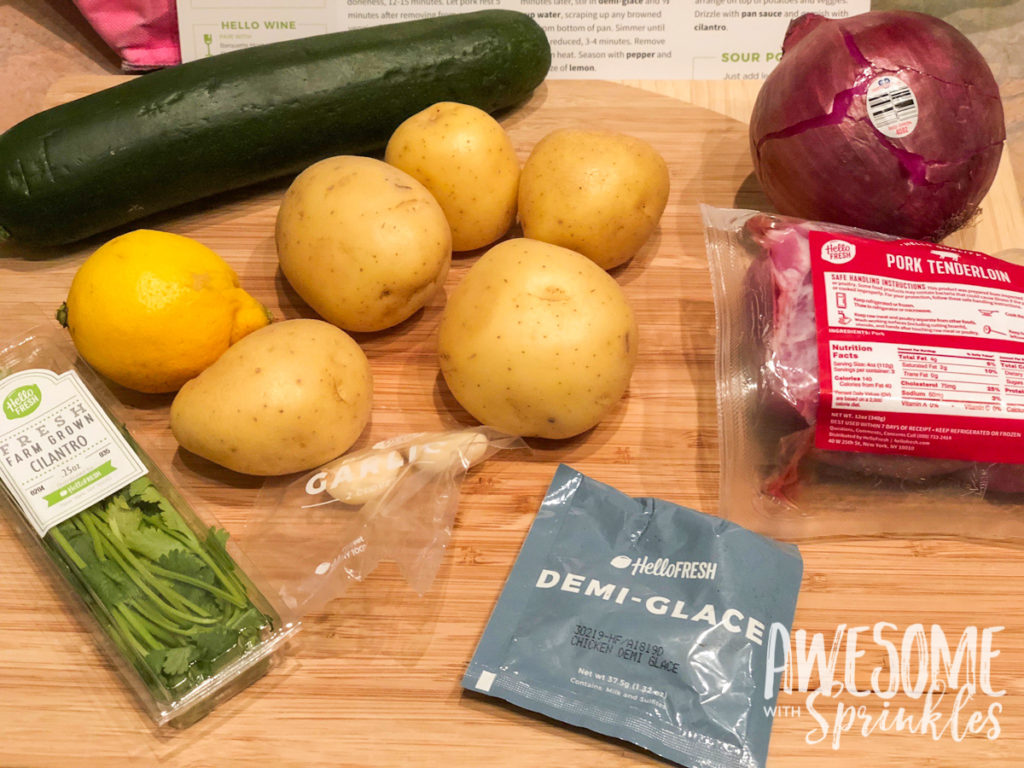 This was my least favorite meal of the week. It took almost an hour for everything to be done. The potatoes needed to be baked in the oven, as did the zucchini and onions. Once the pork was seared, it also had to finish in the oven (luckily I had a meat thermometer to check when the pork came to temperature). Too many things going on at once in the oven. Again I tossed the cilantro because it was wilted, almost looking moldy in the packaging. When everything was done, it was bland and one dimensional. The demi-glace was the best part but sadly didn’t thicken up. 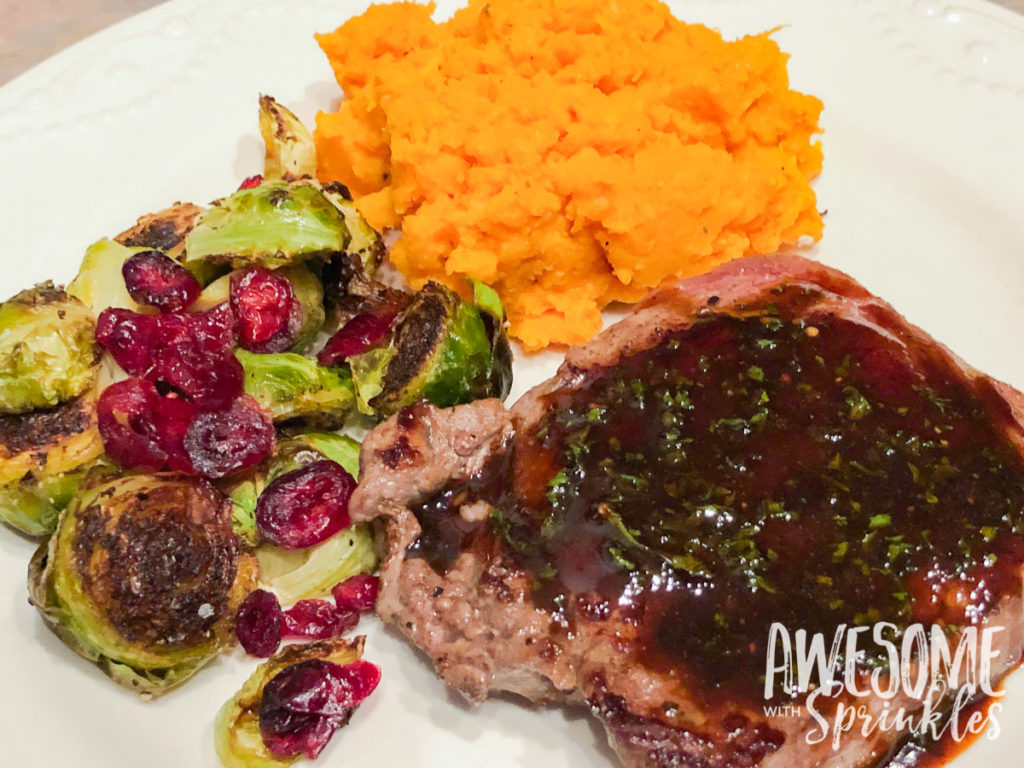 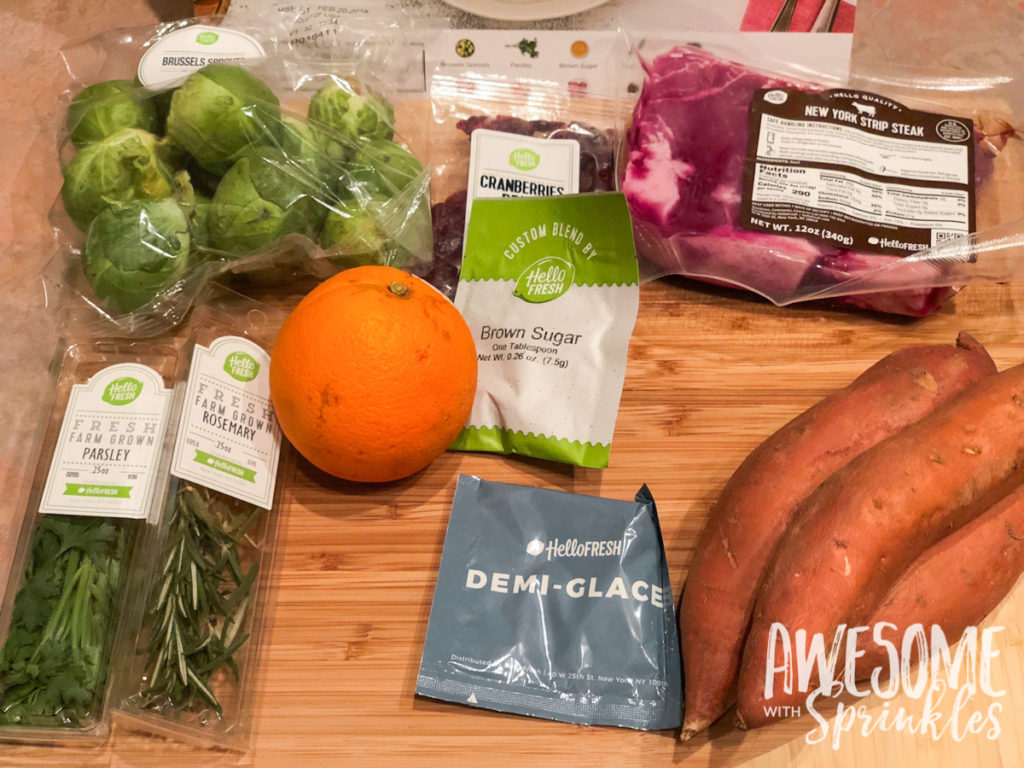 Probably the best meal of the week, and not just because I shared it with Heidi for Galentine’s Day! It was a “premium” meal so there was a $5 up-charge per meal (+$10 for 2 meals). It was a very fall type dish, with strong autumn flavors, which was a bit unexpected heading into spring – especially the sweet potatoes with brown sugar, the dried cranberries mixed in with the brussels sprouts, and the rosemary in the demi-glace (which after some increased cooking and Heidi-supervision, thickened to the right consistency this time!).

I did feel like there were not enough brussels sprouts, especially considering the up-charge. I probably could have eaten the whole two servings myself, once I washed and cleaned them up. This was another recipe where I was sent “extra.” I had a whole extra sprig of rosemary that I didn’t know what to do with. Perhaps this was a timing issue on my end, but the sprouts were done way before everything else and got cold, so I had to put them back in the oven to keep warm while everything else finished. Overall, the dish was satisfying. I would absolutely re-create this on my own! 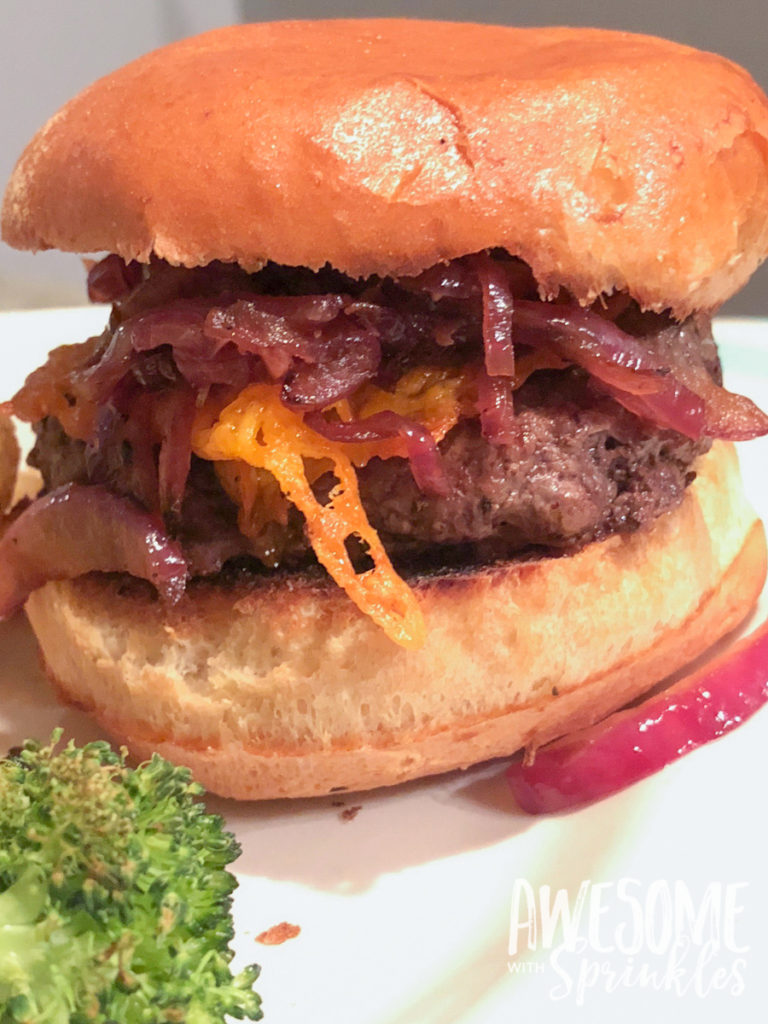 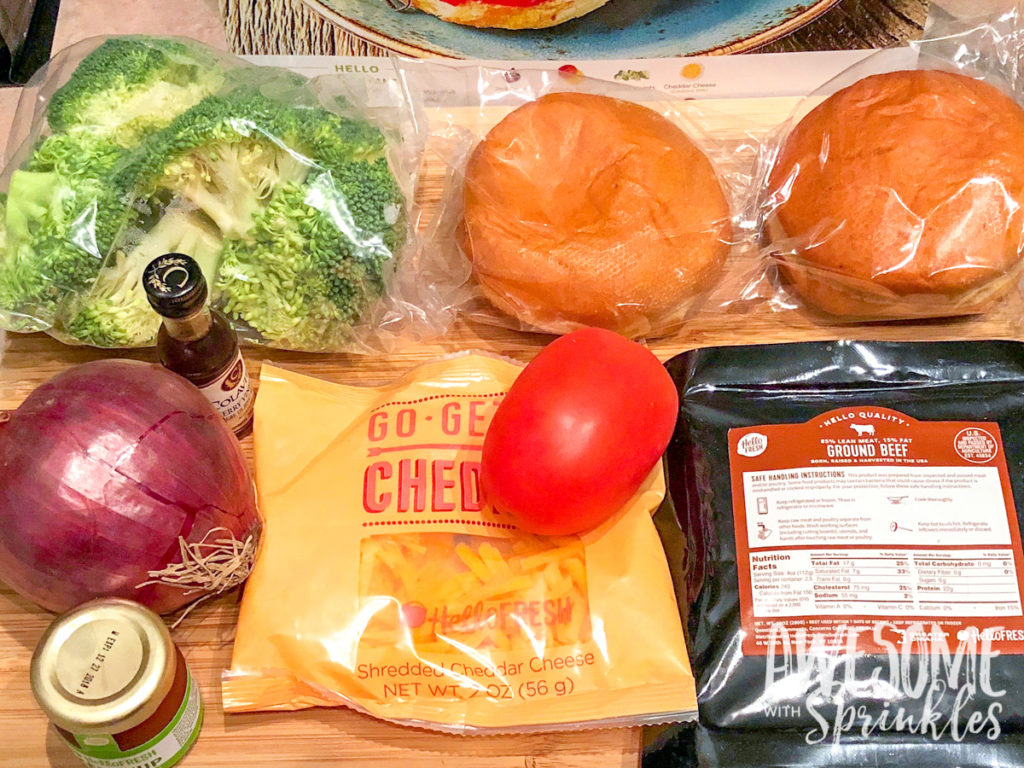 Second to least favorite meal of the week. I had all sorts of issues going on. They really seemed to complicate an easy recipe, which was essentially cheeseburgers. The burgers were fine, but one broke apart really badly in the pan. I didn’t form a tight enough patty. The rolls were brioche and one of the best parts. I was so looking forward to the onion jam, but there was not enough liquid so they ended up being sautéed onions. Not a bad thing. Just something I could do on my own.

Instead of topping the burgers with cheese and melting it under the broiler, the recipe called for me to make cheese crisps by broiling shredded cheese on a baking pan and then putting the crisps on the burgers. I don’t know if I didn’t cook them long enough, but they did not come out as anticipated. I did top my burgers with the now gooey blobs of cheese but it was certainly not crisp. In an effort I assume, to balance the meal, the side for these burgers was broccoli. 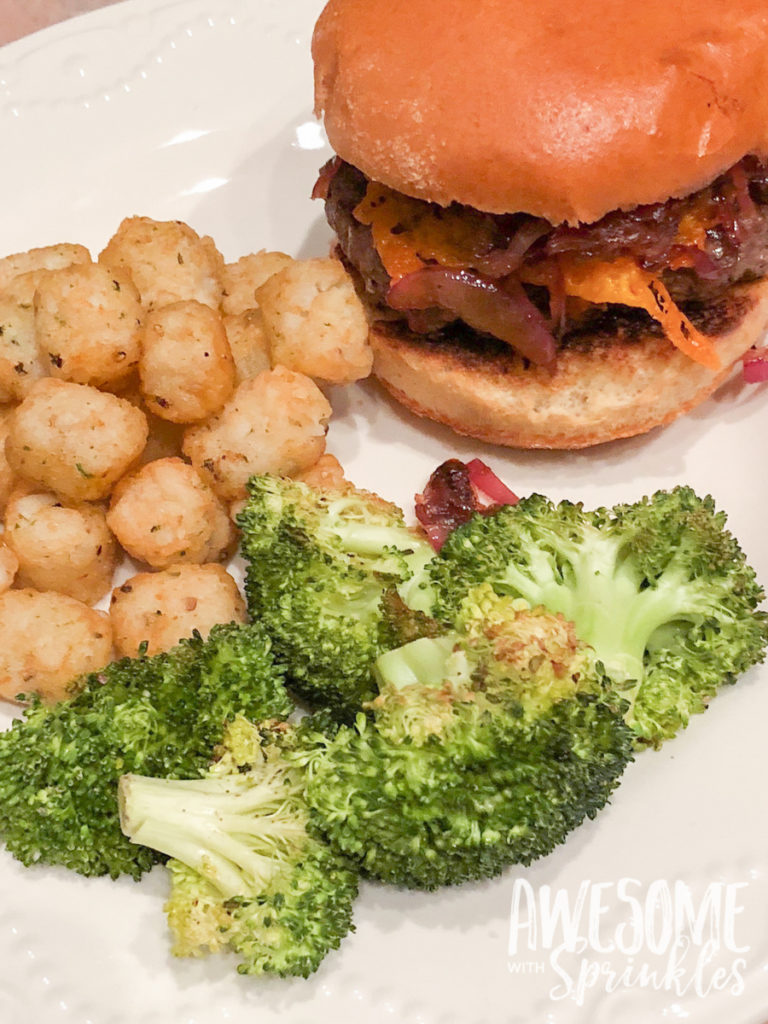 Not really what I want to eat with burgers. And I managed to over salt it, so it was inedible. To supplement, I added tater-tots from my freezer that I’d had probably a bit too long. They were stale tasting and too blonde. So a fail there too on my part. I didn’t even try to salvage the leftovers of this for another meal, and they went in the trash. This was a third recipe where I was sent ingredients that weren’t consumed fully in the dish – red wine vinegar for the onion jam and a tiny jar of ketchup for the burger. 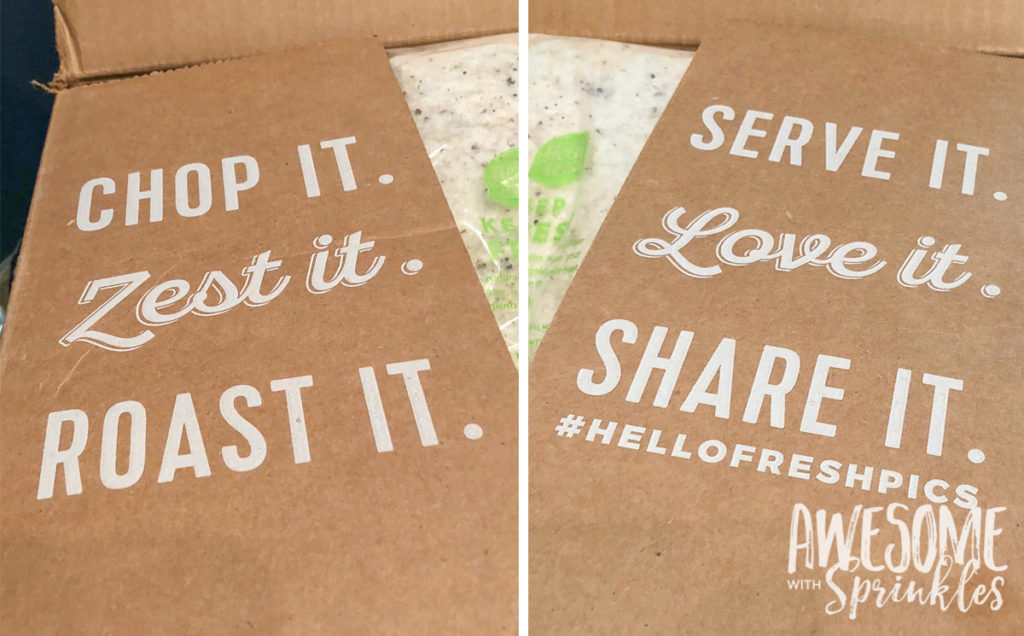 I give HelloFresh a B-. Maybe Green Chef set the bar really high, but I did not enjoy my meals as much as the ones I received from Green Chef. The levels of flavor really weren’t there, even though I seasoned at every step, and I didn’t feel like the dishes were things that I wouldn’t make on my own.

Also, I didn’t like how much waste there was. At the end of some of the recipes I had extra ingredients I didn’t know what to do with. There was extra plastic packaging that couldn’t be easily recycled or reused. The meal prep felt less orchestrated and synchronized, so some components were done way earlier and sat and got cold, and I felt like I spent at least 10-15 more minutes than the recipe cards indicated, which for a weeknight meal, was a lot.

There were places the meal prep could have been done for me, which would have saved time. Produce had to all be washed. Garlic could have been minced. Onions and peppers could have come chopped and diced. Burger patties could have been already formed. I did like being able to pull out one of the paper bags and it had all of my ingredients for the meal, instead of sorting through colored coded packages, but the convenience wasn’t worth the extra packaging and not being able to see what may have been spoiling and needed to be eaten first (like the herbs!). There were less dishes and pans going, for the most part, so that was a plus!

HelloFresh does offer quite the variety of meal plans to fit different families and tastes, and they have options for 2 or 4 people, 3-4 meals per week.

It was slightly more affordable than Green Chef, but if I’m going to spend $ on a meal delivery kit, it better be Wow.

Disclaimer: This post is not sponsored by, nor am I affiliated with, HelloFresh.